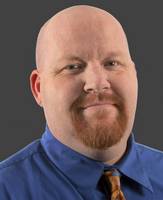 Jake Griffin is the assistant managing editor for watchdog reporting at the Daily Herald. He writes a weekly column appearing Wednesdays on tax spending and government accountability. From 2007 to 2010 he was responsible for coverage of DuPage County government. Before that, he covered Naperville from 2004 to 2007. He came to the Daily Herald in 2000, serving as the West Chicago and Warrenville beat reporter until 2004.

Currently, he is responsible for producing in-depth projects and analysis of government spending and tax-dollar waste. He has worked on a number of projects, including the Daily Herald's award-winning coverage of the Northern Illinois University campus shootings and subsequent recovery efforts.

He chronicled the DuPage Water Commission's misspending of its $69 million reserve fund. Most recently, he completed a series detailing how hundreds of public pools in the state don't comply with federal safety regulations.

Griffin has appeared on ABC 7 Sunday morning broadcasts and WBBM NewsRadio 780, where he discusses stories he has written for the Daily Herald.

Growing up in northeastern Oregon, Griffin's first job as a child was delivering a regional newspaper every afternoon and a local newspaper every Tuesday morning. His family moved to St. Louis, Mo., when he was 14 and he enrolled in a high school magnet program for journalism before beginning a series of newsroom internships throughout suburban St. Louis. He attended college at Missouri Southern State University in Joplin, Mo., where he received a journalism scholarship.

He worked at the Joplin Globe throughout college, starting as a part-time sports writer, then as a part-time feature writer and finally covering "cops and courts" full time before moving to Chicago in 1999.

Throughout his career, he has covered presidential debates, national political conventions, the 1997 handover of Hong Kong to China and statehouse government. Griffin lives in Chicago with his wife and daughter.