These children of immigrants anticipate a life-changing trip

What's it like to hear stories about your parents' home country and try to learn its traditions and language without ever having set foot there?

Tackling questions of identity is ever so complicated for the children of immigrants. But it's especially difficult when your parents come from Laos, a Southeast Asian nation with a difficult history not well-known to many Americans.

A group of Lao-American suburban youths will have the chance to find some of those answers, to fill in missing pieces of their personal puzzle, during a visit to their parents' homeland on a three-week cultural trip this summer.

They expect it will be a monumental event in their lives.

"It will be life-changing," said 13-year-old Natalie Bounyavong of Elgin.

The youths are members of the Lan Xang Traditional Lao Music and Dance Troupe that is fundraising through CrowdRise to sponsor the $3,000-per-person trip in June for a total of 21 people, including chaperones and nine young people from the Northwest suburbs. The group operates under the Lao American Organization of Elgin, a nonprofit that provides services to the local Lao community.

The youths' families came from Laos as refugees after the end of a long civil war that gave rise to a Communist government in 1975. Elgin became one of the largest Lao communities in the United States outside California after 500 families settled there, according to the Office of Refugee Resettlement.

Still, people of Lao origin remain a very small minority in Illinois, where only about 7,000 out of 12.7 million residents identified themselves as such in 2010, according to the latest census data available.

The youths grew up with varying degrees of knowledge of their family histories, as some parents and grandparents were more reluctant than others to share past hardships. Most learned to speak Lao as young children but stopped when they started in English-speaking elementary schools.

The youths matter-of-factly talked about being "whitewashed," a term sometimes considered derogatory that refers to minorities who have assimilated into the broader culture. But that's simply borne out of a natural desire to fit in, coupled with the pressure to be like everyone else, they explained.

"It's always like, 'Are you Chinese? Japanese? Korean?' If you say 'no,' then it's like, 'You are not Asian,'" Natalie said. "For the longest time, I felt like I couldn't show people (who I was) if they didn't even know about Laos."

Sixteen-year-old Madison Chau of Schaumburg agreed. "No one really cared to hear about your culture or anything," she said. "It's draining to be with people you don't connect with at all."

It also means feeling different among your own relatives.

"In the family, everyone speaks Lao except (me and my brother)," said Leela Herena, 16, of Streamwood. "When we go to family parties, the elders are kind of like, 'Why aren't you representing Lao culture?'"

The Laos trip will be cultural and educational, with sightseeing and hands-on learning from local "masters" about traditional music and dance, which the youths will bring back to other members of the Lang Xang troupe.

But the trip means so much more, they said, in ways that are personal and deeply emotional. It's a chance to see, touch and taste the world their families came from, which will allow them to better understand their parents and grandparents, they said.

They all hope to connect with relatives in Laos, but some live in very rural areas that are hard to get to, they said.

"Sometimes you don't realize how truly blessed you are," Madison said. "(Our families) sacrificed so much to come here."

Many of the youths met at a Midwest music summer camp offered by the Lao Heritage Foundation, based in Washington, D.C., where they connected with peers who share their experiences. That, in turn, gave them impetus to continue learning through the Lang Xang troupe.

Being understood has raised her self-confidence, said Tiffany Keokanlaya, 16, of South Elgin, who's one of two youths who visited Laos once when they were much younger. "I never knew why I was shy. I never questioned it. After I look back, this is why."

Lao American Organization of Elgin Board President Alan Thavisouk understands the youths' emotions. He left Laos as a toddler and returned for the first time at age 33. 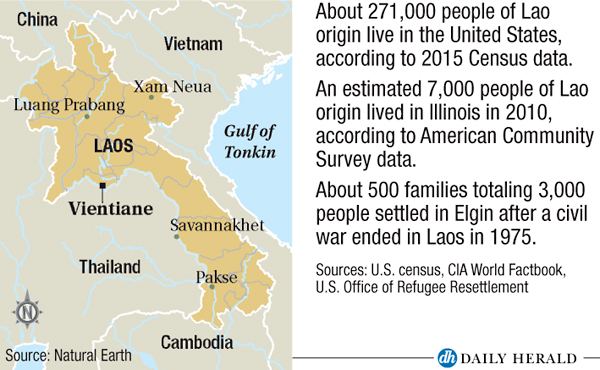 Making the expensive trip to Laos is difficult for many immigrant families, he explained.

There are lingering fears of what might happen once there, because the refugees were loyal to the Kingdom of Laos that was overturned by the Communist regime still in power, he said.

"I am super excited for them," Thavisouk said. "I know from my own personal experience how going back to Laos really helped me connect to my identity and really understand who I am as a person. All the stories that I heard from my parents, from my family, it was always in my heart. But once I got there, it made everything feel whole."

Thavisouk said he's also preparing the youths for how they will be perceived as Lao-Americans. "Automatically, if you are someone from the outside, you're (seen as) not Lao," he said.

The youths' enthusiasm for the trip is shared by their parents.

Ket Herena, Leela's mother, returned to Laos in 2007 for the first time since having left at age 2. "I remember when I first went back and I feel the connection to my country, that this is home," she said. "Hopefully, they have the same experience that I did."

Natalie's mother, Joy Bounyavong, said she's glad her daughter will experience Laos beyond learning about its music and dance. "I want her to see how the kids back home are, how they go to school, how they live," she said. "I hope this will make us a lot closer."

The youths said they believe the trip will be a defining, even existential, moment in their lives.

"It means everything to us," Leela said.

"Going to back to Laos, it's like putting me back together, in a sense," she said. "Because I think that ever since birth, I don't feel like I have been me."

Click here to sign up for the Elgin Newsletter
Article Comments ()
Guidelines: Keep it civil and on topic; no profanity, vulgarity, slurs or personal attacks. People who harass others or joke about tragedies will be blocked. If a comment violates these standards or our terms of service, click the X in the upper right corner of the comment box. To find our more, read our FAQ.