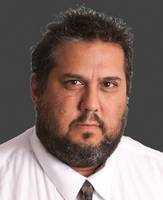 Robert Sanchez is a lifelong suburbanite who joined the Daily Herald in 1995 as a weekend police and Warrenville reporter. He has since done the rounds in the newspaper's DuPage County bureau, covering the communities of Lombard, Villa Park, Oakbrook Terrace, Oak Brook, Lisle, Winfield and Wheaton.

During that time, Sanchez chronicled the rise of the Cantera development in Warrenville, the demise of the DuPage Theatre in Lombard, and Kelly Jo Kuharski's heartbreak during the fourth season of "The Bachelor."

As a metro writer from 2004-07, Sanchez covered a variety of issues related to DuPage County government and politics, including various budget battles and efforts to build a western access road to O'Hare International Airport. He was named Assistant City Editor in 2007.

Sanchez graduated from Eastern Illinois University with a journalism major and a political science minor. He lives in Bolingbrook with his wife and their three children.