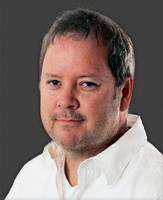 Rick West is a staff photographer who has been with the Daily Herald since 2000. He covers communities around Kane County on a daily basis, but his job has afforded him the opportunity to shoot events including a relief trip to earthquake-ravaged Haiti, the Republican National Convention, the Chicago Bears' most recent trip to the Super Bowl in Miami, and the 2010 Stanley Cup championship and ensuing celebrations.

He is a graduate of Ohio State University and lives in Kane County with his wife and daughter.