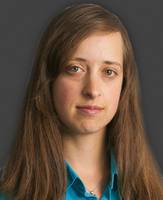 Marie Wilson has worked full-time for the Daily Herald since September 2010. She has been covering Naperville since June 2013 after starting in Aurora and Lombard. At the Herald, she has been part of coverage teams that have won five awards for public service, community service, non-deadline and deadline reporting and education reporting. Her work on the 2014 series Heroin in the Suburbs: Through their Eyes netted three of those awards, including recognition from the Chicago Headline Club, Illinois Associated Press Media Editors and the Illinois Press Association.

Wilson lives in Lisle and grew up in Wheeling, where she decided she wanted to be a journalist when she was 12. Before coming to the Daily Herald full-time, she interned as a reporter at the Naperville Sun, Daily Herald and Pittsburgh Tribune-Review. Her work also has appeared in the Champaign News-Gazette, The Daily Illini and the Wheeling Countryside. She graduated tied for first in class rank from the College of Media at the University of Illinois at Urbana-Champaign in May 2010, with a major in News-Editorial Journalism and a minor in Gender and Women's Studies.