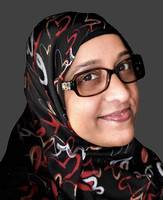 Madhu Krishnamurthy is an Assistant City Editor and Diversity Editor for the Daily Herald. She covers minority affairs and news from diverse communities throughout the greater Chicago area. She previously covered the education beat involving suburban K-12 schools, community colleges, and universities. During her 23-year career as a journalist, Madhu has written stories on a variety of issues and topics, including human interest, local government, health, politics, religion, and diversity.

Madhu joined the Daily Herald in December 2000. She chairs the Editorial Diversity Committee whose goals are to broaden employees' understanding of the various cultures represented within and reflect the diversity of the communities the company serves through its news products. Madhu has done extensive work covering issues affecting the Muslim, Arab, Hispanic, Black and Hindu communities in the suburbs.

She was a frequent guest on ABC 7 Chicago News, and has given radio interviews about her exclusive news reports. Her work has garnered numerous Peter Lisagor Awards and other journalism accolades from various press associations. She is the immediate past president of the Chicago Headline Club, the largest chapter of the Society of Professional Journalists, and an adjunct faculty member in the Communications Department at Columbia College Chicago.

Before joining the Daily Herald, Madhu worked at The Edmond Sun, a small daily newspaper covering Edmond, Oklahoma. There she worked as a writer, copy editor and paginator. She interned at the Daily Oklahoman and The Edmond Sun after graduating from the University of Central Oklahoma in 1998 with a bachelor of arts degree in newspaper journalism. She is a 2021 UCO Distinguished Alumna.

She speaks four languages: English, Hindi, Urdu and Tamil, and currently is learning Arabic. Madhu grew up in Dubai, United Arab Emirates, where her interest in journalism first sparked after watching 24/7 CNN coverage of the Persian Gulf War. A first-generation immigrant to the U.S., Madhu lives on Chicago's Northwest side.