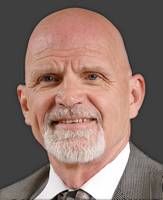 As Assistant Managing Editor for Opinion, a position he assumed in 2010, Jim Slusher oversees editorial writing, selection of syndicated columns and cartoons and letters to the editor for the Daily Herald Opinion Page. Working with an editorial board made up of top editors in the Daily Herald newsroom, he helps shape the newspaper's voice on subjects of interest to suburban readers, while seeking to present an engaging mix of opinions on broad social and political topics along with a forum for local residents to present their views on whatever topics they consider important.

Previously, Slusher had worked since 2003 helping supervise the most advanced reporting staff at the Daily Herald, developing investigative projects, cultural issues stories, coverage of major breaking news and enterprise stories on virtually all topics. Prior to assuming these duties, he produced and supervised programs promoting an atmosphere of learning at all levels in the Daily Herald's newsroom. His efforts ranged from regular critiques and one-on-one editing to a slate of specifically targeted workshops scheduled throughout the year. He has led workshops on journalism and newsroom leadership for various regional and national organizations, including the Inland Press Association, the American Newspaper Publishers Association and the American Copy Editors Society, and he teaches a community education course in autobiographical writing at William Rainey Harper Community College.

When Slusher joined the Daily Herald as news editor in charge of the copy desk in 1989, it was a homecoming of sorts to his professional roots in Illinois. He and his wife Patty left San Diego, where he had worked three years as managing editor of an award-winning suburban daily, to return to the Midwest and start a family that would eventually include three boys, two of whom now have graduated from Prospect High School with the third soon to follow.