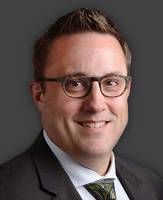 Jim Baumann began his career at the Daily Herald in 1985 as a police reporter after having done summer internships at the then-weekly Lake County Herald papers in 1983 and the Rockford Register Star in 1984.

Jim, who grew up in Arlington Heights and attended Prospect High School, was named a Distinguished Alumnus of Prospect during the 2007-08 school year. He attended the University of Illinois at Urbana-Champaign and graduated with a degree in journalism. Jim covered the police beat and several towns in Cook and DuPage counties as a reporter for the Daily Herald and was named editor of its Neighbor section in DuPage in 1990. He became an assistant city editor soon after and left the DuPage bureau in 1995 to open an office in Elgin. He ran that bureau for two years before opening another bureau in St. Charles. He returned to Elgin in 2003 as manager and editor of the bureau.

Jim has won Peter Lisagor awards for editorial writing and - along with many other editors and reporters - for coverage of the school bus/train disaster in Fox River Grove that claimed the lives of seven students. One of the projects he is most proud of was an exploration of the growing influence of heroin in the suburbs, which culminated in a town hall session that drew about 900 people. Jim won an Elgin Image Award in 1996 and again in 2004.