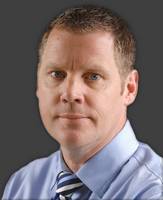 Jeff Knox was named Senior Director of Photography for the Daily Herald in 2007. In this role, he oversees a staff of 20 photojournalists and photo editors. He works with the design team and other editors to make sure our visuals, including photos, videos, graphics and other forms of multimedia, accurately illustrate the story.

Starting in 1998, he was an Assistant Director of Photography working in the St. Charles bureau. Here he oversaw a staff of photojournalists that covered the Tri-City area.

In 1990, he started at the Daily Herald as a staff photographer and worked in the DuPage County bureau covering daily news and sports assignments.

From 1988 to 1990, Knox worked as a photojournalist at the Macomb Journal in Macomb, Ill, and then the Daily Gazette in Sterling, Ill.

He is a graduate of Illinois State University in Normal.

Knox lives in the western suburbs with his wife and three children. His interests outside of the office include cycling, coaching and he is actively involved in the Royal Family Kids Camp.