Now that it's been finely tuned, the Wauconda Park District's proposal to renovate and reopen historic Phil's Beach will get a public review Wednesday.

The village's plan commission will evaluate an updated master plan for the site, which occupies more than 2 acres on the east side of Main Street north of Route 176, on the shore of Bangs Lake. The discussion is set for 7 p.m. Wednesday at village hall, 101 N. Main St.

A picnic pavilion, a splash park, a wading area and a bath house with changing rooms and showers are among the amenities included in the latest design, which replaces preliminary concepts first floated last year.

Additionally, the beach itself will be partially ringed by a curving boardwalk that will include a viewing platform designed for people with physical disabilities.

"(The plan) has something for everyone," Mayor Lincoln Knight said.

A Naperville firm called the Hitchcock Design Group developed the plans. The company specializes in landscape architecture and has completed public projects in Lisle, Elgin and other suburbs.

The project should cost about $3 million, park district Director Nancy Burton said. District savings and state grants will pay for some of the work.

Officials also will seek community donations through a fundraising campaign that will start this summer, Burton said. The work may have to done in phases if all the money isn't immediately available, she said. 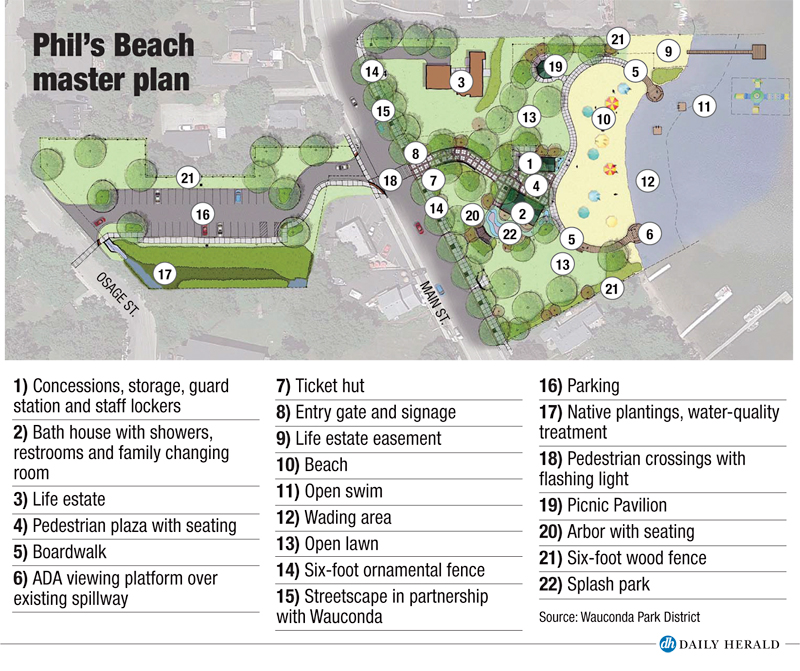 If the design clears the plan commission, the village board likely will consider the project in May.

Once approved, park district officials will seek construction bids this summer, Burton said. Construction could begin in mid-fall, she said, and a spring 2019 debut is possible.

Dating back to the 1920s, Phil's Beach was founded by Phil Froehlke as a private business that eventually was handed down to his descendants. It drew people to Wauconda every summer for decades.

Both the beach and its giant, J-shaped slide were featured in the 1980 film "The Blues Brothers."

But the family closed the beach in 1990 because of rising insurance costs.

After many private discussions with family representatives, the district bought the property and about one acre on the west side of Main Street for $690,000 in 2016.

The land across the street will be used for public parking.

As part of the deal, a member of the family that formerly owned the beach will be allowed to continue living in a house on the property.

Wauconda Trustee Adam Schlick was on the park board when that panel agreed to purchase Phil's Beach, and he helped select the architects for the project. Schlick said he's very pleased with the proposal.

"I think they've captured the history with the architecture of the bath house and other structures on the site," he said. "But (it) also will have some modern amenities ... that will make Phil's a great addition to our village."

related
Comments
Article Comments
Attention: We are experiencing technical difficulties with our Facebook Comments module at this time. Comments will remain disabled until we are able to resolve the problem. We apologize for the interruption. We invite you to engage with our content and talk with other commenters on our Daily Herald Facebook page at https://www.facebook.com/DailyHeraldFans/. Thank you.