Even lifesaving drugs have limits.

That's the warning from some public health experts raising concerns over misperceptions about the opioid overdose reversal drug naloxone and its power to save lives.

Yes, the drug revives overdosing opioid users who have stopped breathing and saves their lives in that critical moment if a bystander or first responder administers a dose in time.

Yes, the drug has been used successfully at least 840 times in five suburban counties since it became readily available four years ago.

But, no, naloxone does not cure addiction.

No, naloxone is not a risk-free, one-step solution to a public health crisis that continues to kill suburban residents in increasing numbers each year. At least one doctor and poison control expert calls its use an "experiment" and says claims about lives saved are overstated. 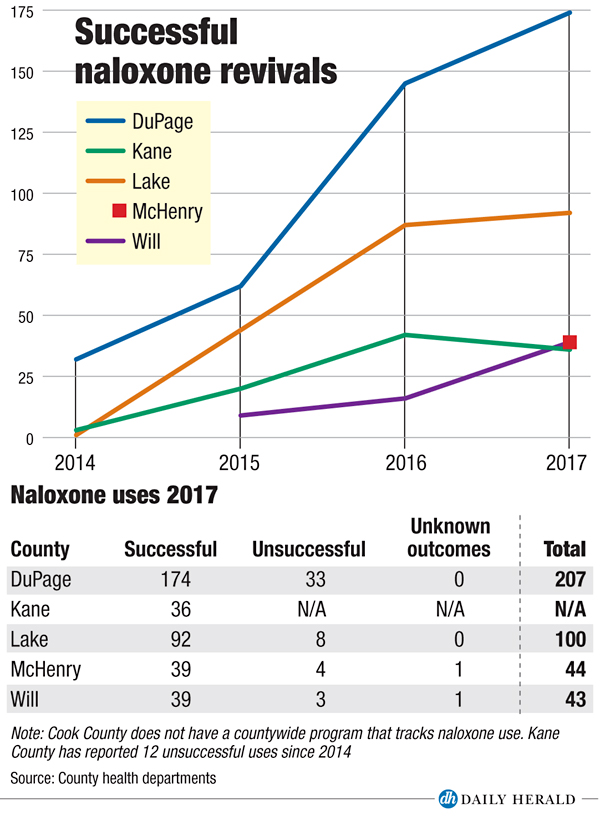 Now doctors, coroners, first responders and addiction specialists are pushing for more data and better follow-up care after the revival drug is given.

"That, I think, is the real big disconnect -- that naloxone just saves your life in that moment," said Dr. Michael Wahl, medical director of the Illinois Poison Center. "An hour or two later, the cravings return. ... We've got to find out how to identify people and treat them so they don't take that next deadly hit."

A naloxone save. Then what?

In the past four years, naloxone has gone from a little-known drug used in ambulances and emergency rooms to a widely available overdose antidote hailed as a lifesaver.

Its purpose has remained the same: to relieve life-threatening symptoms of an overdose -- a lack of breathing and a loss of consciousness.

Naloxone binds to the opioid receptors in the brain and knocks off any opioids, which allows overdosing patients to begin breathing again.

In the suburbs, naloxone's spread started in 2014, when public health officials created the DuPage Narcan Program. The program trained more than 1,200 police officers to administer a nasal spray version called Narcan and equipped them with doses.

The DuPage Narcan Program, which has trained more than 1,200 police officers to administer an opioid overdose reversal drug beginning in 2014, was part of the early wave of making the antidote more widely available to fight the heroin and opioid crisis. - Daily Herald file photo October 2014

Since then, it has been used successfully 413 times -- but not on quite that many people because some users have been revived more than once. At this point, there is no mechanism to track repeat revivals.

"The benefit of saving a person's life and potentially getting them into rehabilitation is well worth the effort," DuPage County Coroner Richard Jorgensen said. "Unless we save people and then they realize that they need help, we are not going to affect this crisis."

Soon after DuPage created its naloxone program, Lake, Kane and Will counties followed. McHenry County started its effort in 2017. In Cook County, police officers carry naloxone, and clinics, hospitals and nonprofits offer it, but there isn't a county program to track its use.

Legislators took notice of overdoses reversed in the suburbs and required police officers statewide to be trained in and equipped with naloxone effective in 2016.

State and federal governments also approved Lali's Law, which expanded availability of the antidote at pharmacies. It was named for Buffalo Grove native Alex Laliberte, who died of a heroin overdose in 2008.

Last October, Illinois created a standing order that so far has given 135 pharmacies permission to provide the reversal drug, even without a prescription.

There has been some talk of steps that should be taken after someone is revived to help end addiction. But that discussion is amplifying as new programs launch.

For example, the DuPage sheriff's office has begun sending deputies with clinicians to follow up after someone has been revived. Kane County is stepping up its drug education and prevention this year and is using an online mapping system to track successful naloxone uses.

Such programs might help quell concerns about using naloxone on hundreds of people each year -- people who, without treatment, are likely to continue misuse of risky substances that can cause death.

Too often, said Kathleen Burke, director of substance use initiatives in Will County, "we are just sending people back out there to overdose and potentially die."

Deaths would 'double or triple'

While suburban officials stand by the value of naloxone, one East Coast doctor and poison control expert says its use is something of a public health experiment that isn't proven to stem the tide of overdose deaths as effectively as many assume.

Dr. Lewis Nelson, professor and chairman of emergency medicine at Rutgers New Jersey Medical School, recently told a group of reporters in Chicago there are two main reasons naloxone is not saving as many lives as officials say it is.

For one, he said it's impossible to tell if any one overdose would be fatal. Because of the way opioids slow down breathing and give users a sleepy, slumped-over look, Nelson said it's difficult for bystanders without medical training to know the difference between someone "enjoying a good high" and someone in danger of death.

"We're giving naloxone to people who wouldn't have otherwise died," Nelson said. "This is a natural experiment."

Giving naloxone when it's not necessary is risky because the reversal drug immediately triggers withdrawal. Lake County Coroner Howard Cooper said this quick switch from high to "dopesick" leaves drug users angry and in pain -- a risky combination that often fuels repeated use, despite the threat of death.

"When addicts are at that point, they're not using to get a high; they're using to function. It's not a want; it's a need," Cooper said. "A lot of people say, 'That's ridiculous! What do you mean they went home and got high?' They're not looking at it to get high. They need it to function."

If a person revived on naloxone uses opioids again quickly enough, death is more likely because a large dose of opioids remains in their system.

"Naloxone doesn't save lives," Nelson said. "In many cases, it just delays death."

He suggests first responders administer naloxone only when someone's breathing has stopped completely, using a small dose at first to minimize the severity of withdrawal.

Naloxone's lifesaving ability also may be overestimated because police officers carrying the drug sometimes revive the same person more than once.

"It is common for them to see the same folks," Cooper said. "That definitely happens."

But no one in the suburbs knows exactly how often. Cooper and other coroners and health officials say they don't track repeat naloxone patients; they count only how many times the antidote has been used. The Lake County sheriff's office, however, knows of at least six examples from the past three years when the same people have been revived more than once. 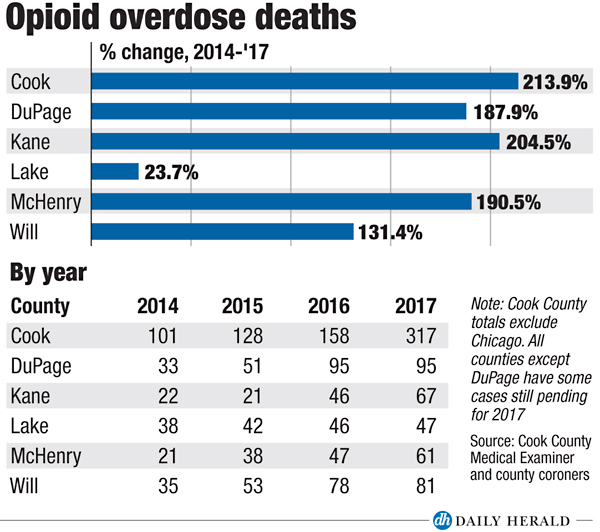 Still, out of 223 times naloxone has been deployed by the Lake County program, Cooper estimates 175 to 200 have been on different people. In DuPage County, coroner Jorgensen estimates at least 175 more people would have died since the Narcan Program began, during which time officers have deployed the drug successfully 413 times.

"Without our naloxone program and the increasing availability in pharmacies, I think our heroin and opioid crisis would be double or triple the (death) numbers that we have right now," Jorgensen said. "We're operating all of this in hopes that people can be rehabilitated and can live productive lives again."

Nelson, however, points to a study conducted in Massachusetts that shows a return to productivity isn't possible for all. The study found 6.5 percent of people revived by naloxone died within a day of receiving the medication, and among those who survived the first day, another 10 percent were dead within a year.

Wahl, from the Illinois poison center, said there are two ways to spin those findings. He chooses to see the positive: The vast majority of people revived with naloxone are alive in a year, if they make it through the first day.

"For that 90 percent, they really need to get extended treatment," he said. "There really needs to be ongoing care for people to get help."

Naloxone: In many cases, 'it just delays death,' doctor argues