Are there enough candidates to do the job in your town?

Michael Reich isn't seeking re-election to the Queen Bee Elementary District 16 school board on Tuesday, and yet he might wind up back in the seat he's held for nearly 30 years.

Two other incumbents are the only ones running for four available spots on the board. It's one of at least 150 races on suburban ballots that don't have enough candidates -- more than double the number in 2009, a Daily Herald analysis of election records shows.

The Queen Bee board must fill its ranks with appointees and has recruited a PTA volunteer for one of the slots. But no one has come forward to take Reich's place.

The Glendale Heights retiree says he'll accept a temporary appointment if the board can't find a replacement, even as he hopes to spend more time with his family and on the school district's educational foundation.

Reich is disappointed boards like his are struggling to attract candidates for positions that have a "direct impact on how our kids are being taught."

"You're elected to represent your neighbors on how the schools are run."

Competition in suburban municipal and school board races has declined sharply over the past five elections, raising concern among some groups that promote civic engagement.

In search of solutions, many believe Illinois should make it easier to run for office by simplifying rules for getting on the ballot.

Others wonder if the sheer number of governments in Illinois -- said by Governing magazine to be the most in the nation -- creates too many board seats for the dwindling number who want the jobs.

Elections without enough candidates to fill open seats have ballooned in the suburbs since 2009, especially on school boards. 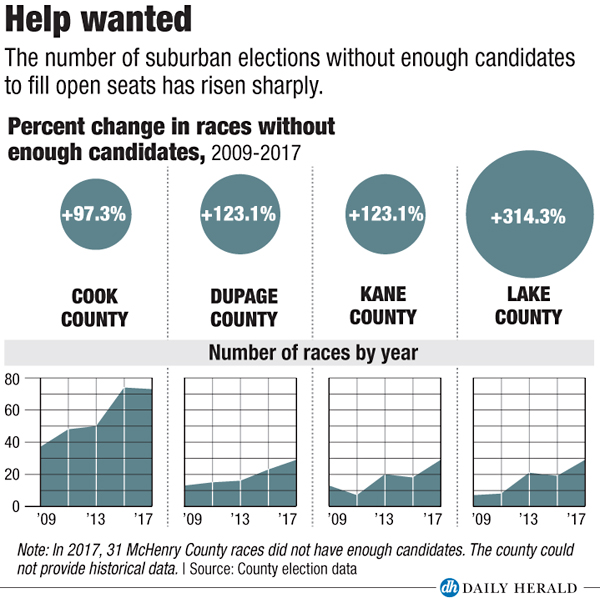 McHenry County has nine school board races without enough candidates but was unable to provide past data. The analysis includes candidates whose names appeared on the ballot and does not include write-ins.

"They feel like they're untouchable," said Maryam Judar, executive director of the Citizen Advocacy Center, an Elmhurst-based nonprofit that supports ballot access. But barriers to running for office might help keep numbers of candidates low, she said.

Getting on a ballot and staying there is often the toughest part of a campaign, Judar said. That's because Illinois has one of the most complicated candidate filing processes in the country, she said.

Then they must present the documents in such a way that a simple staple can make a difference.

That tripped up Katherine Basham.

"It strikes me as majorly ridiculous," the Hampshire village president candidate said. "I interpreted 'bound' to mean in an envelope and (Village President Jeff Magnussen) objected to the fact that I didn't staple it. He won. But I refuse to give up."

An electoral board made up of village board members booted her from the ballot in January because her paperwork wasn't stapled, a rule intended to prevent pages being added or subtracted after the filing deadline.

Basham would have to take the village to court to try to reverse the decision.

So instead of asking voters to check the box next to her name, Basham -- a first-time candidate -- hopes enough voters write her name on the ballot, legibly and correctly.

"With all these little administrative hoops that candidates have to jump through, it can be really difficult and expensive to make sure all the i's are dotted and t's are crossed," said Sarah Brune, executive director of the Illinois Campaign for Political Reform.

She believes the rules keep some people from running for office.

"Some states all you have to do is pay a filing fee and no one can challenge that," Brune said.

Others suggest the way Illinois elects its leaders needs to change, as well. One idea that has taken hold in other states would have governments move toward ward representation, on the theory it would be less daunting for potential candidates and increase diversity on elected boards.

In the suburbs, a few rural school boards have geographic requirements for board membership, but most ward races are at the municipal level and are still fairly rare.

In Cook, DuPage, Kane and Lake counties, 187 of the 221 suburbs with council races elect the board at-large, but fewer than half those races are contested.

In the 34 towns where voters pick city council or village board members by ward or district, 22 have at least one contested council race. But even then, fewer than half of all the ward races in those 22 towns are contested.

Some wonder whether Illinois has too many opportunities to hold elective office, pointing to the suburbs' numerous small school districts and independent park, library and fire districts that are run by separate boards.

"It's a legitimate question," said Kent Redfield, emeritus professor of political science at the University of Illinois at Springfield.

"There's a limit to how many people have the ambition or sense of civic duty and time to hold public office."

That limit has clearly been reached in some suburbs. After Tuesday's election, Queen Bee's board is among many in the suburbs that will have to name appointees for unfilled seats.

Queen Bee board members, most of whom have grown children, have sought current parents to fill the open seats, Superintendent Victoria Tabbert said.

Some are leery of the volunteer position because of the time involved and a perceived lack of skills for the job, Tabbert said.

To ease those concerns, district officials point out Illinois law requires board members to complete training.

Reich is offering to stay on for a few extra months to give the board more time to find his replacement.

"It would be easier if I saw somebody standing in the wings, ready to roll," he said.

Click here to sign up for the Naperville Newsletter
Article Comments
Guidelines: Keep it civil and on topic; no profanity, vulgarity, slurs or personal attacks. People who harass others or joke about tragedies will be blocked. If a comment violates these standards or our terms of service, click the X in the upper right corner of the comment box. To find our more, read our FAQ.