In light of Flint water crisis, is there lead in our supply?

Follow @DHJakeGriffin
Updated 3/29/2016 10:10 AM
Editor's note: This is Part 1 of a continuing series on suburban water quality. Part 2: How Antioch solved the problem of lead in its water Part 3: Recent water violations in 33% of analyzed suburbs

What it failed to mention was that the single sample had lead levels 48 times higher than the federal warning level.

"That's definitely something I would want to know about, and it does give me great concern," said Michael Womack, who lives kitty-corner from the home where the sample originated. "We have the oldest house in town, and I know we have a lead line that comes into our house from the street. If they're getting those kinds of results over there, we may have the same problem, right?"

The issue in Womack's neighborhood may be -- and in fact, likely is -- an isolated situation that can be resolved individually by the homeowner. But it emphasizes the need for testing and for understanding the results, even in suburban communities unaffected by broad systemic problems like those that have made Flint, Michigan, infamous.

Despite the lead results from Womack's neighbor's house of 720 parts per billion, the highest level among the 2,967 suburban samples in a Daily Herald analysis of suburban water systems, it wasn't enough to trigger a systemwide notification.

Federal guidelines suggest any drinking water sample with lead at more than 15 parts per billion in a liter of water is a health hazard, particularly to children. But unless more than 10 percent of the samples from a water system are above that level, no action is required.

And there is no requirement that neighbors be alerted about elevated levels at test sites, even though homes likely to have lead issues are targeted for testing.

By comparison, the average lead count in Flint's troubled water supply was at 27 parts per billion at the height of its ongoing water crisis. Some Flint homes recorded lead levels in excess of 13,000 parts per billion.

Meanwhile, public health experts have suggested any water supply with lead over 5 parts per billion is a health risk. 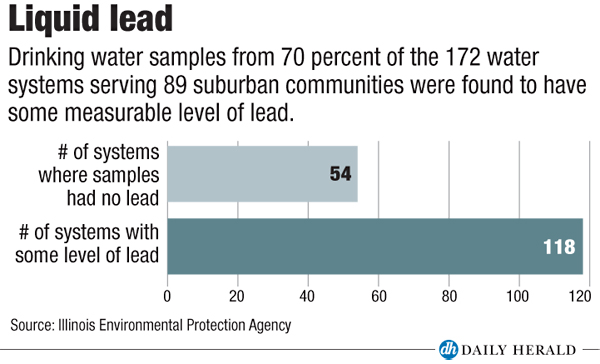 The analysis of lead testing results for 172 public drinking water systems in 89 suburban communities revealed 8.2 percent of the samples taken from 2013 to 2015 contained levels in excess of 5 parts per billion in a liter of water. Additionally, 47 samples taken during that time were also above the federal action level, according to public records obtained from the Illinois Environmental Protection Agency's website.

However, because the results showed sporadic spikes throughout the suburbs, none of the systems were in violation of federal lead limits and the water supply is considered safe.

While Libertyville officials say the lead levels in the home of Womack's neighbor are easily remedied by running the water for a few minutes before drinking it or using it for cooking, Womack and the homeowner, who spoke with the Daily Herald but declined to be identified or quoted, said the village could have done a better job of notifying and teaching residents about potential lead problems.

Lead contamination is one of dozens of impurities McHenry Analytical Water Laboratory chemist Billie Jean Anthony tests for when samples from area drinking water supplies are sent to her. - Brian Hill | Staff Photographer

While more than two-thirds of the suburban water systems in the Daily Herald analysis had at least one sample come back with a recordable lead level -- which could be as little as one part per billion -- none showed contamination as widespread or as serious as that found in Flint.

Locally, there was nothing in the IEPA reports to indicate water from Lake Michigan, wells or a river source created a greater risk of lead contamination.

Older plumbing equipment, cheap fixtures, flawed sampling and even road construction can cause lead to appear in water samples.

Here in the suburbs, officials follow a set routine for identifying potential problems. Lead is only one of several contaminants that can jeopardize a water system, but it's the only one for which system operators rely on property owners to provide the sample specimen.

Sampling mandates are based on population. Most suburban water systems are required to test 30 samples every three years. Four or more samples would have to exceed the federal limit for the government to trigger intervention.

From 2013 to 2015, nine water systems came close when 10 percent of the samples had lead levels exceeding the federal threshold, according to IEPA records. One of those water systems was in Wauconda, where three of the 30 samples recorded levels above the government limits.

"There are many things that can cause high readings," said Alex Pryde, Wauconda's superintendent of public works. "When we discover issues with samples, we send a couple guys around to explain what the levels mean and what we need them to do, and there's a checklist to go through if we have to take another sample. But in the end, our water is good."

But village officials contend these numbers are inflated because the state requires towns to use sampling sites that "are most likely to have high levels of lead and/or copper caused by the contact of corrosive water with lead and copper-containing plumbing materials," according to an IEPA policy manual. They believe the results are not indicative of the kind of water coming out of most residents' taps.

McHenry Analytical Water Laboratory is a popular choice among the 172 drinking water systems in 89 suburbs to receive samples to test for more than 130 different types of contaminants. - Brian Hill | Staff Photographer

The samples also are a liter of the faucet's "first draw," which requires the tap to be unused for at least six hours to ensure any sediments or other contaminants have settled.

"That first draw sample is what's potentially going to be the worst, because the water has settled for a long time in the pipes, and that's usually where the lead comes from," said Theresa O'Grady, group manager for water resources at the Aurora-based engineering firm Crawford, Murphy & Tilly.

Lead testing sites are selected from a list of properties most likely to register a lead reading. If those samples are clean, then it's presumed that the rest of the system is safe. If multiple samples reveal contamination, then officials know to increase monitoring to determine how widespread the problem is.

Property owners have to agree to participate in the testing program since they are responsible for collecting the sample. The water system operators provide property owners with equipment and instructions, then the water samples are shipped to a lab for testing.

Several labs in the suburbs, including Suburban Laboratories in Geneva and McHenry Analytical Water Laboratory in McHenry, handle the majority of local system testing. Most of these companies also provide testing services to any property owner. A simple lead test runs about $50, officials said.

"And anything we get for compliance testing, the results go directly to the state and are uploaded to the IEPA," said Patrick Rodriguez, customer service manager at Suburban Laboratories. "In the end, anyone whose water is tested has to get notified of the results. It's the law."

Wauconda officials said all property owners in the program receive their test results and are advised of how to mitigate any lead contamination. In the meantime, they advise property owners to follow Centers for Disease Control guidelines, which suggest users flush out taps by letting the water run for several minutes before using it to drink or cook with.

How will you know?

Liters of drinking water are sent to McHenry Analytical Water Laboratory, where chemists like Penny Janus separate the samples into smaller amounts and put them into machines to determine lead levels in the water. Janus explains how it works. - Brian Hill | Staff Photographer

Each operator of a public drinking water system issues a brief synopsis of the system's most recent test results every year called a Consumer Confidence Report. Its contents are mandated by the federal government but don't provide much in the way of specifics.

Libertyville issued a separate water quality report in 2015 and mailed it to all the town's water customers, but the owner of the home with the extraordinarily high lead sample said that's all he received from the village in regards to his water quality, and he had no idea his lead levels were so high until a reporter called to ask him about the results.

Three years earlier, a sample taken from the same house recorded lead levels at 7.93 parts per billion, according to IEPA records.

Village officials said all lead-testing participants receive the results of their samples in a mailing sent to the property where the test was conducted. The village doesn't keep records of correspondence with homeowners and could not verify that the homeowner had received the lead test results, officials said.

"Our protocol is to call and speak with property owners and send them a form letter," said Paul Kendzior, Libertyville's recently hired public works director.

The letter also instructs property owners how to mitigate lead from their water, village officials said.

Womack suggested the village should let neighbors know as well, since many residential properties are built around the same time with the same materials.

"I don't know if there's a reason to be concerned yet, but it would be something I'd be interested in knowing," he said.

It's unknown what caused the elevated results for the sample in Libertyville. Kendzior believes it's the service line that connects the home to the water main, but the homeowner said the house's plumbing was gutted and replaced. Village officials said they've offered to retest the property's water.

Though Libertyville wasn't the only place to have an extraordinarily high lead sample result in the past three years, some towns are more proactive about determining the source of the contamination.

When Lincolnshire Utilities Superintendent Terry Hawkins received the lead testing results for the village in September 2014, he admitted he was surprised to see one sample recorded at 519 parts per billion. The village dispatched a water crew to Jack and Violet Graber's home to figure out why there was so much lead in their sample. Since the village doesn't have any lead water lines, Hawkins said he knew "any issue we have is internal to the home."

Soon enough, the investigation revealed the culprit. The Grabers' sample was taken from their rarely used first-floor bathroom sink, drawn from an ornate, decorative faucet. They removed the decorative faucet and replaced it with equipment that contained no lead.

"We would have had no idea otherwise," Violet Graber said. "I would highly encourage anyone to participate in their town's water testing program if they're asked, or at least get your water tested. It's very worthwhile."

• Monday: How towns react when lead is found.

related
Comments
Article Comments
Guidelines: Keep it civil and on topic; no profanity, vulgarity, slurs or personal attacks. People who harass others or joke about tragedies will be blocked. If a comment violates these standards or our terms of service, click the X in the upper right corner of the comment box. To find our more, read our FAQ.