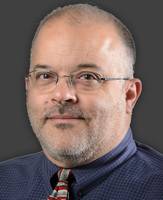 In late 2012, Mike Smith was named Fox Valley Editor, overseeing the Tri-Cities and northern Fox Valley editions of the Daily Herald. Previously, he was named Tri-Cities editor in 2006.

Prior to his appointment in the Tri-Cities, Smith was the Daily Herald's Weekend Editor/assistant metro editor from 2000-02, and was Design Editor from 2002-06. He won a Peter Lisagor Award in overall design for his front page design, "The Champs," commemorating the White Sox World Series victory in 2005.

He is particularly proud of his design role in project work on the award-winning series, "44 Minutes in January," about the Brown's Chicken murders, as well as in-depth projects on India, Poland, Mexico and the Philippines.

Before joining the Daily Herald, Smith worked for Copley Newspapers for 17 years in the Elgin and Aurora offices. He held a variety of positions, including assistant managing editor and design manager for the suburban Chicago group. Smith became interested in journalism while a student at Glenbard North High School in Carol Stream. He graduated from Northern Illinois University, majoring in journalism.

A Chicago native, Smith grew up in Glen Ellyn and Carol Stream. He now lives in Plato Township in Kane County.