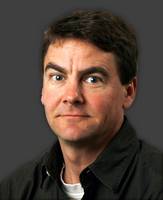 John Starks has been a staff photographer with the Daily Herald since 1997. He worked for eight years in the Arlington Heights Office Center and currently calls the Elgin bureau his home base, although most shifts are spent working from his car.

Prior to the Daily Herald, he worked as a staff photographer for the Northwest Herald in Crystal Lake, The Lorain Morning Journal near Cleveland, and The Monroe Evening News in Michigan. The Evening News was one of the nation's last evening-delivered daily newspapers. He also worked as a staff writer for the Sturgis Journal in Michigan, covering police, county government, and features.

He started his career in the late 1980s shooting black-and-white film that was hand rolled, and hand processed. Prints were made in chemical trays in a darkroom. He was among the first newspaper photojournalists in the Chicago area to fully change all aspects of his daily work to digital.

He has covered three national political conventions and photographed every U.S. President since Richard Nixon, when, as fourth-grader on a family vacation, he pushed the button of his box camera as the disgraced president left the White House for the last time.

He considers coverage of the 1995 Major League Baseball World Series a highlight of his career. He also photographed Michael Jordan's Chicago Bulls as they won the NBA Championship in 1998. He also covered each of the Chicago Bears, Blackhawks, White Sox and Cubs playoff appearances in the last decade. John was the on-site photo editor for the Daily Herald coverage team in 2003 when the famous Steve Bartman incident happened at Wrigley Field. He also traveled twice to New Orleans to cover the Hurricane Katrina devastation in 2005.

He has won more than 120 national, regional and state awards for news, features, sports, portraits, pictorials, sports portfolio, and nature photographs, as well as videography.

He and his wife have two kids and own a children's book publishing company.