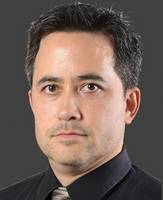 Harry Hitzeman joined the Daily Herald reporting team in December 2000 and now covers the Kane and McHenry county judicial systems, as well as the towns of Campton Hills and Wayne.

Hitzeman earned a bachelor's degree in print journalism from the University of Illinois at Urbana-Champaign, with concentrations in political science and philosophy. Hitzeman was born and raised in Naperville and worked two years as a staff writer for the Naperville Sun before joining Paddock Publications.

He lives in Kane County and has volunteered as a coach for the Tri-Cities Soccer Association.