On June 12 at 4:41 p.m., those warnings coalesced in a "perfect storm" when a stalled CN train bisected the village during the afternoon rush.

Among the thousands of vehicles caught in the jam were ambulances headed to Good Shepherd Hospital with two patients from a DUI crash at Ela Road and Northwest Highway.

"Do we have any idea where this stopped train is extending from?" a Barrington paramedic radioed in a video provided by the village last week. "I'm not sure which direction I should head in."

As first-responders quickly found out, all four CN crossings -- at Main Street, Hough Street (Route 59), Northwest Highway and Lake Zurich Road -- were inaccessible, and trains on an intersecting rail line also backed up.

"Metra is frozen at the station due to CN being broken down and Main Street at Cook is blocked," an officer advised.

While traffic gridlock spiraled, Barrington police who had coalesced south of the tracks to handle the DUI crash reached out to neighboring departments. "Can you please let Lake Zurich PD, Lake County and Barrington Hills know on our northwest side we have no officers on right now. So if we need assistance we'll be calling them," a dispatcher asked.

As she idled in traffic, Barrington resident Erika Olivares tried to troubleshoot how to reach her 8-month-old son, Leo, before day care closed. "Basically I was panicking," she recalled Thursday.

Some desperate commuters ducked under train cars to reach the opposite side. "There are numerous people who are actually crawling over the train that's stopped here," a 911 caller reported. "It's getting more and more dangerous -- there are kids doing it as well." 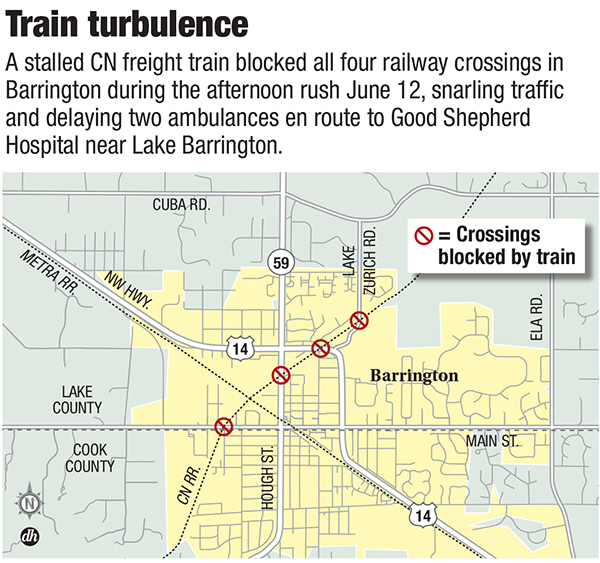 After detours that resulted in delays of at least 20 minutes, paramedics delivered their patients to Good Shepherd doctors who diagnosed them with nonlife threatening injuries.

Traffic and pedestrians eventually dispersed with no harm reported to the train crawlers.

And, Olivares' parents, who just happened to be visiting, came to Leo's rescue.

"The more you drive around, the more it eats into that golden hour of survival," Fire Chief Jim Arie said, referring to the optimum time for traumatic injuries to be treated.

For Mayor Karen Darch, "this was my worst-case scenario. It's what I've always been afraid of and it's why we're fighting to get that grade-separation money," she said of a proposed $73.5 million underpass at Northwest Highway and the CN tracks.

Such extended delays are rare in the village and the railroad "works hard to keep trains moving through Barrington safely and efficiently," Waldron said, noting that Union Pacific Railroad tracks that carry freight and Metra trains intersect with the CN in Barrington. "The windows to move through Barrington are tight and carefully coordinated to avoid, or absolutely minimize, any delays to Metra trains, and thus road crossing delays in the village."

Federal regulators approved CN's merger with the smaller EJ & E Railroad, which runs through the north, west and south suburbs, in December 2008 on the grounds it would ease train traffic regionwide.

Records provided by CN in 2016 show Barrington averaged less than one blocked crossing lasting 10 or more minutes a month at the Route 14 crossing, Waldron noted.

To pay for the proposed underpass, Barrington has received some federal funding and is applying for more. The village has requested the U.S. Surface Transportation Board require CN to chip in -- so far unsuccessfully despite appeals in court. The latest rejection came a day before the train broke down.

Typically railroads are required to contribute about 5 percent of grade separation costs if federal funding is involved.

related
Comments
Article Comments
Guidelines: Keep it civil and on topic; no profanity, vulgarity, slurs or personal attacks. People who harass others or joke about tragedies will be blocked. If a comment violates these standards or our terms of service, click the X in the upper right corner of the comment box. To find our more, read our FAQ.