Who owns the crumbling dam on the Fox River in Batavia: The state or the city?

The city administrator, the city attorney, the Illinois Department of Natural Resources and some aldermen say it belongs to Batavia.

At least two aldermen -- one the son of a former mayor who dealt with dam issues in the 1970s -- believe it belongs to the state.

Now the city may ask a judge to settle the question, once and for all.

"In nearly all discussions of the dam, the question of its ownership arises. As we make decisions regarding planning and financial responsibility, it is imperative to have final resolution to who is the owner," Alderman Marty Callahan said. "Many residents will likely question bearing the costs if the perception is they don't own the dam."

The dam in Batavia, from west to east. The dam originally belonged to the Challenge windmill factory, the building pictured here on the east bank. - Brian Hill | Staff Photographer

At a committee discussion about the dam Tuesday, Callahan suggested seeking a declaratory judgment. His fellow aldermen agreed to ask a lawyer -- not the city's attorney -- for a proposal on doing that.

The issue came up as aldermen were discussing what to do now that the Illinois Department of Natural Resources has nixed giving the city permission to repair the aging concrete dam. 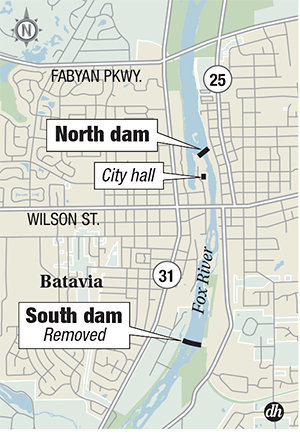 The city has been working on getting the dam insured, and figuring out what to do if it suffers another big breach, which would cause water levels in the attached Depot Pond to drop.

The 10-foot-tall lowhead dam was built circa 1911-1913 by private citizens to supply water power to the Challenge windmill factory on the east bank.

In August 1975, part of the dam fell away, lowering the water level to the north and exposing mud flats north to Fabyan Parkway, according to news reports and aerial photographs.

State officials at the time told Batavia they wouldn't repair it until the city gained access to it from owners of private property along the river.

Kane County Recorder of Deeds documents show that the owners of the Challenge property conveyed a parcel to the city in 1975. The dam falls in the boundaries of the parcel, judging by the legal description of the location. That description says the line begins at an iron bolt on the southwest portion of the dam.

The breach was then filled. A state representative tried to get money for rebuilding the dam in 1976, but failed.

In 1994, the city council voted to give the dam to the state.

Discussions about the dam go back decades, to when the breach happened in 1975, and in the 1990s, around the time Batavia Park District was dredging Depot Pond and creating the Riverwalk.

• In 2003, there was an advisory referendum, brought by residents' petition, asking if it should stay or go. Voters said it should stay.

• In 2004, the city council agreed, barely, with a state plan to cut the height of the dam and put in some boulders to create "riffles" in the flow.

• In 2005, the city council opposed a revised plan that called for cutting it down and putting in concrete jetties north of the dam.

• In 2006, the state announced it was going to take out the whole dam, but ultimately the money appropriated for such work was instead spent on other dams.

• In 2007, the state issued a report reviewing the condition and safety of 25 run-of-the-river dams, including Batavia's. It said Batavia's was too damaged to be modified for safety.

• In 2014, Batavia officials started talking about the dam again.

• In 2017, the city administrator and attorney researched its ownership, and concluded that the state never accepted the 1994 quitclaim deed. And contrary to what Alderman Dave Brown's late father, former Mayor Robert Brown, told him, there's no evidence there was a deal for the state to take the dam in 1975, they said.