Where slaves hid while traveling on Underground Railroad in suburbs

Despite Illinois' status as a free state, runaway slaves and free blacks did not find the state accommodating in its earliest days.

Slave owners in southern Illinois were allowed to keep their slaves when Illinois joined the union in 1818. Then, they were permitted to commit newer generations of freed black residents to indentured servitude for decades. Illinois' early years are also littered with laws subverting black residents' freedoms, the welcoming of slave catchers and on at least one occasion an attempt to change the state Constitution to allow slavery statewide.

Yet, throughout much of the early 1800s, Illinois served as a path to freedom for fugitive slaves traveling between safe houses as they sought asylum in Canada.

"I think Illinois can be proud of its history on racial justice, not so much at how the government reacted and what the laws were, but many individuals in the central, northern and western parts of the state have a proven history of helping slaves avoid capture," said Owen Muelder, an author and director of the Underground Railroad Center at Knox College in Galesburg. "Illinois can be proud, for the most part at least, that there were many of its people who were on the right side of history."

Recognized stops on the Underground Railroad dot the landscape of the state, mainly starting at the convergence of the Mississippi and Illinois rivers at Grafton and continuing between the two waterways all the way up to Wisconsin. But just how many slaves found assistance and who was providing it is nearly impossible to know, according to historians. Some conductors never sought acknowledgment of their participation in the Underground Railroad, while others might have received too much credit.

"It's been a long argument of how organized the Underground Railroad was," said Dennis Naglich, an archaeologist at the Illinois State Museum. "There can't be that much public knowledge (back then) or the other side would catch on."

Only a smattering of outspoken abolitionists openly admitted to assisting fugitive slaves, risking legal action, ostracizing or even death because of their defiance of federal and state laws.

"But keep in mind, many of these slaves escaped by their sheer wit and guile, and their own determination," Muelder said. "While they might have gotten some help, much of the time they would have been traveling on their own and a lot of it was just chance." 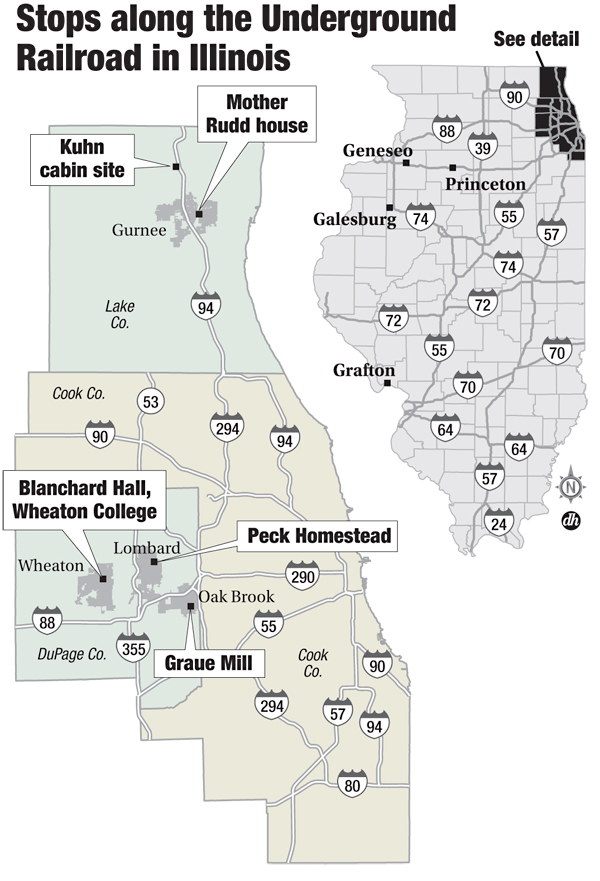 Perhaps the most famous Underground Railroad stop in Illinois is in Princeton, a few miles northwest of where the Illinois River takes a sharp downstream turn south from the east.

Owen Lovejoy was a preacher whose older brother Elijah was murdered in 1837 by a proslavery mob that was angered by the elder Lovejoy's abolitionist views printed in an Alton newspaper he ran. Owen Lovejoy moved to Princeton following his brother's murder and made ending slavery his calling.

"He was an unabashed abolitionist," said Lois Peterson, a docent at the Owen Lovejoy House in Princeton, a National Park Service landmark. "People left his church because of his strong beliefs."

Lovejoy made no secret that his home was a haven for fugitive slaves, even after being arrested on charges of the crime in 1843. After his election to Congress, his 1859 speech denouncing slavery made national headlines when he declared he "aids every fugitive that comes to his door and asks it. Proclaim it then from the housetops. Write it on every leaf that trembles in the forest, make it blaze from the sun at high noon," according to the National Park Service's website.

Towns like Galesburg and Geneseo were known for their collective antislavery views, historians said. When slave catchers would ride into town looking for runaways, many of the towns' men would gather together and escort the slave catchers out of town, Muelder said.

"They also used imaginative ruses to trick slave trackers," Muelder said. "They'd send a carriage off from a barn in one direction to lead the trackers away so they could send the slaves off in the opposite direction a few minutes later."

Some of those who made it to northern Illinois found respite at Graue Mill in Oak Brook, or at Blanchard Hall at Wheaton College, which were used to house fugitive slaves.

The Sheldon Peck Homestead in Lombard is among the verified stops of the Underground Railroad in the Chicago suburbs, according to the U.S. National Park Service. Peck and his family are believed to have housed as many as seven fugitive slaves at a time there, including one man named "Old Charley," who spent considerable time at the Peck's home working and entertaining Peck's children. Peck's son Frank in a book he wrote about his artist father fondly recalled the time Old Charley stayed with his family. Peck's daughter Susan also drew a portrait of the man believed to be Old Charley. The homestead is reopening to the public Thursday after three months of renovations and repairs.

Lake County had several Underground Railroad stops, including the Mother Rudd Home in Gurnee, built in 1841 as an inn and now a museum and home to the Warren Township Historical Society, and the Kuhn Cabin site in Newport Township, where a large granite outcropping served as a signpost for travelers.

Lake County Forest Preserve historian and museum curator Diana Dretske said the county was an important way station for slaves fleeing to Canada via the Great Lakes, but it was made tougher because of the state's notorious Black Laws.

"Most people aren't very aware of Illinois' history and how these laws were intended to control and regulate the movement and amount of the state's black population," Dretske said.

Even Abraham Lincoln -- the Great Emancipator -- once defended a Kentucky slave owner in Illinois over the freedom of a black family staying at the slave owner's Illinois estate near Oakland. He had taken the case over the objection of an abolitionist friend, Dr. Hiram Rutherford, who'd helped the family escape from the slave owner. Lincoln lost the case, and apparently lost a friend, too.

"Dr. Rutherford was very upset that Lincoln took the case and wrote to him expressing his disappointment, saying he thought they were 'like-minded' on the issue of slavery," said Kathy Pardi, overseer of the history museum that is now in Rutherford's home in Oakland.

There is no record of the two friends speaking or corresponding ever again.

A yearlong birthday celebration for Illinois

Most people know about the Great Chicago Fire, but there's a lot more to Illinois history than that. Native American settlements thousands of years old, the battle over slavery, the transfer of influence from southern to northern Illinois, wars and riots, the gangsters and politicians and artists and athletes that shaped our state all will be part of a yearlong series of articles to mark Illinois' bicentennial. The Daily Herald and dozens of publications across the state are joining forces on the series, which will continue until Illinois' 200th birthday on Dec. 3. Find previous stories at www.dailyherald.com/topics/Illinois-Bicentennial/.
Comments
Article Comments
Guidelines: Keep it civil and on topic; no profanity, vulgarity, slurs or personal attacks. People who harass others or joke about tragedies will be blocked. If a comment violates these standards or our terms of service, click the X in the upper right corner of the comment box. To find our more, read our FAQ.