See how your neighbors voted in presidential primary

The presidential primary races in Illinois were hot this year, and now you can see if most of your neighbors agreed with your vote.

Chicago-area counties have released election results down to the precinct, letting suburban voters know where in the region their peers wanted to "Make America Great Again" or to "Feel the Bern."

The graphic shows whether a precinct's voters pulled more Republican or Democratic ballots. The bigger the dot, the heavier the vote was weighted toward the predominant party.

In Illinois, voters in the primary have to pull one party's ballot or the other, and there's nothing to keep someone who usually identifies with Democrats, for example, from voting in the Republican race or vice versa. 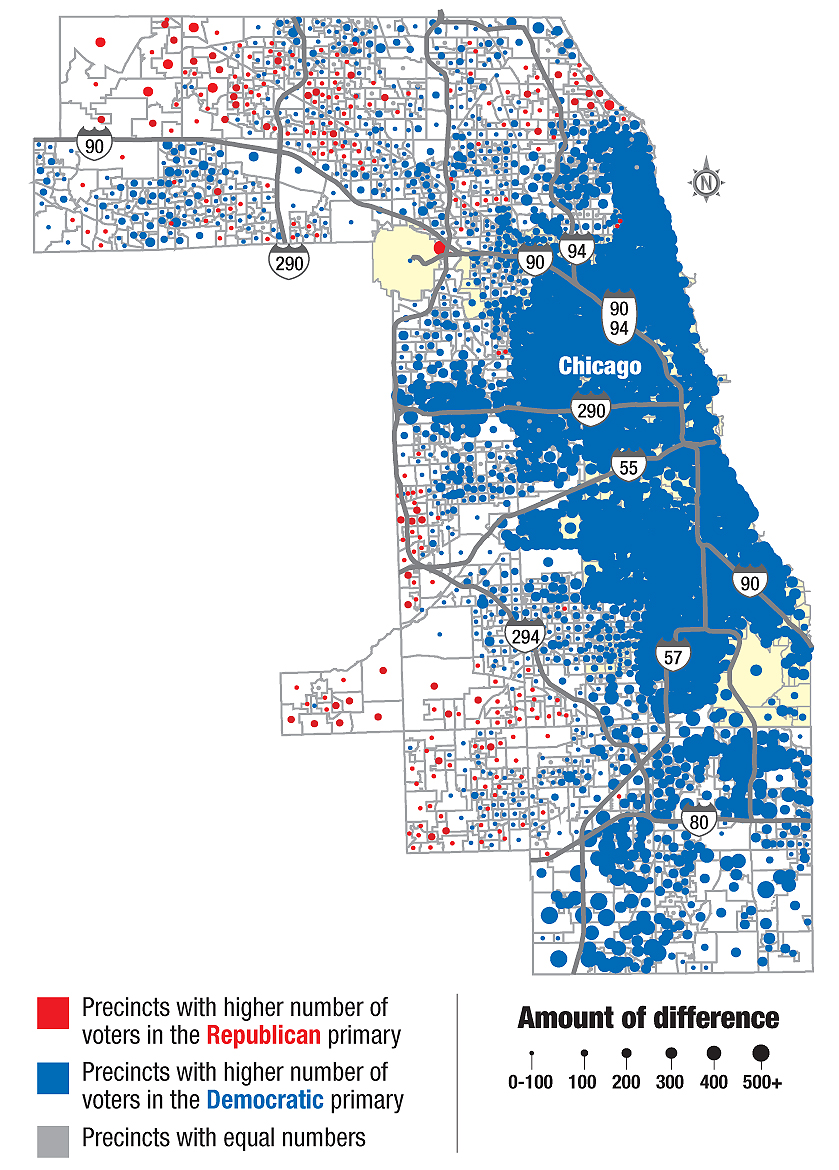 Illinoisans won't be surprised to see the Democratic stronghold of Chicago lit up heavily with Democratic blue, but there's more of a mix in the Northwest suburbs.

Republicans had the most concentrated collection of primary voters the farther toward the northwestern tip of Cook County you travel, with mostly GOP red in the Barrington, Inverness and Palatine areas, in particular.

Democrats did well in the south suburbs and nearest northwestern suburbs like Des Plaines.

Primary turnout doesn't always translate neatly to what happens in November, but looking at the map, it's not hard to see how President Barack Obama received a million more votes than Republican Mitt Romney in Illinois' 2012 general election. 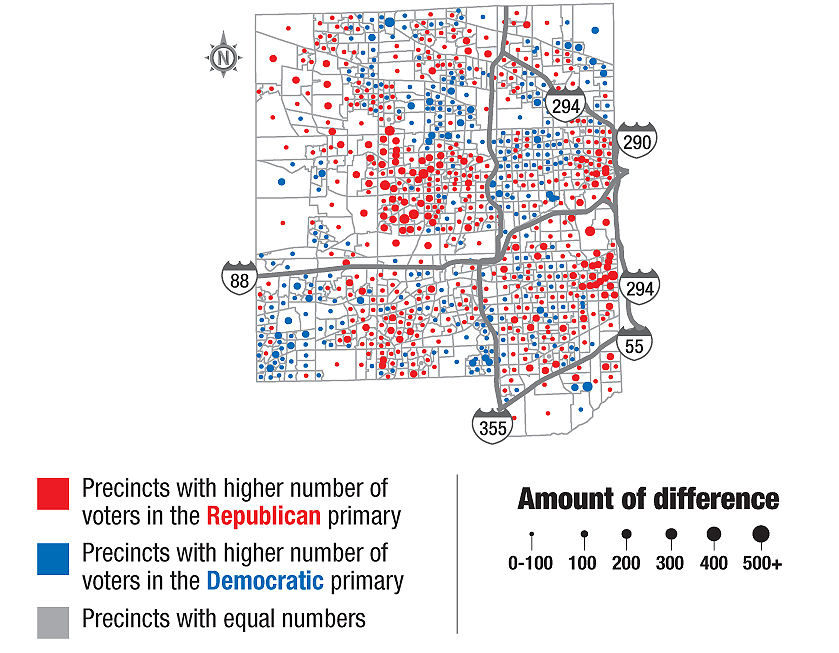 The heart of this traditional Republican stronghold is bright red, with the central areas of the county and south through much of Naperville full of precincts that turned out big for the GOP primary. The same goes for the southeastern part of the county, including Downers Grove,

Overall, more than 17,000 more Republicans than Democrats turned out in DuPage, bucking the statewide trend.

But there's Democratic blue in the DuPage County part of Aurora, as well as in Addison Township. That kind of Democratic turnout could hint at why Obama was able to pull off wins in DuPage County in the last two presidential elections. 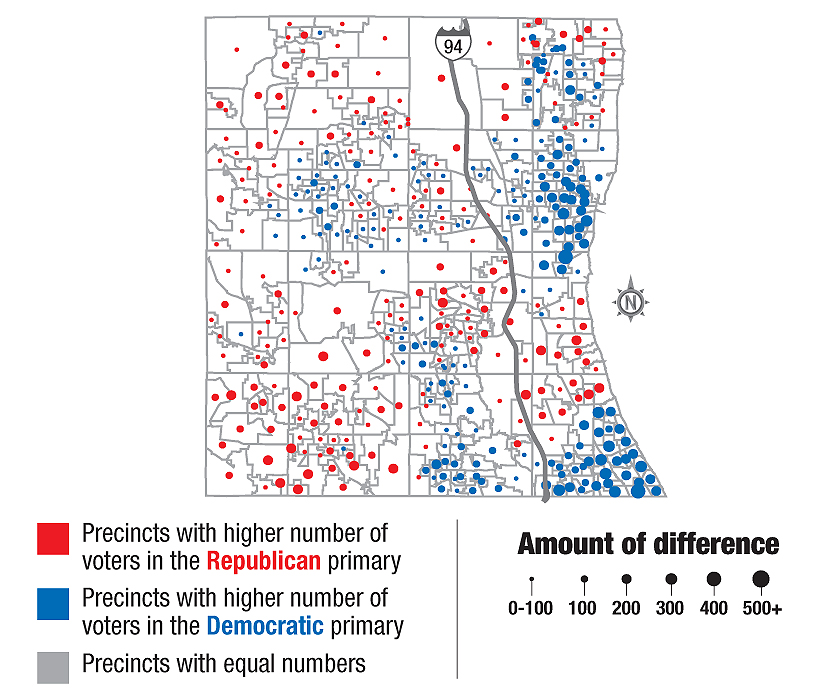 The middle is mixed, and that can help show why Lake County could be the battleground for several major Illinois races here. The state's hottest congressional campaign in the north suburban 10th District is centered here, as is one of the expected big races for Illinois Senate. 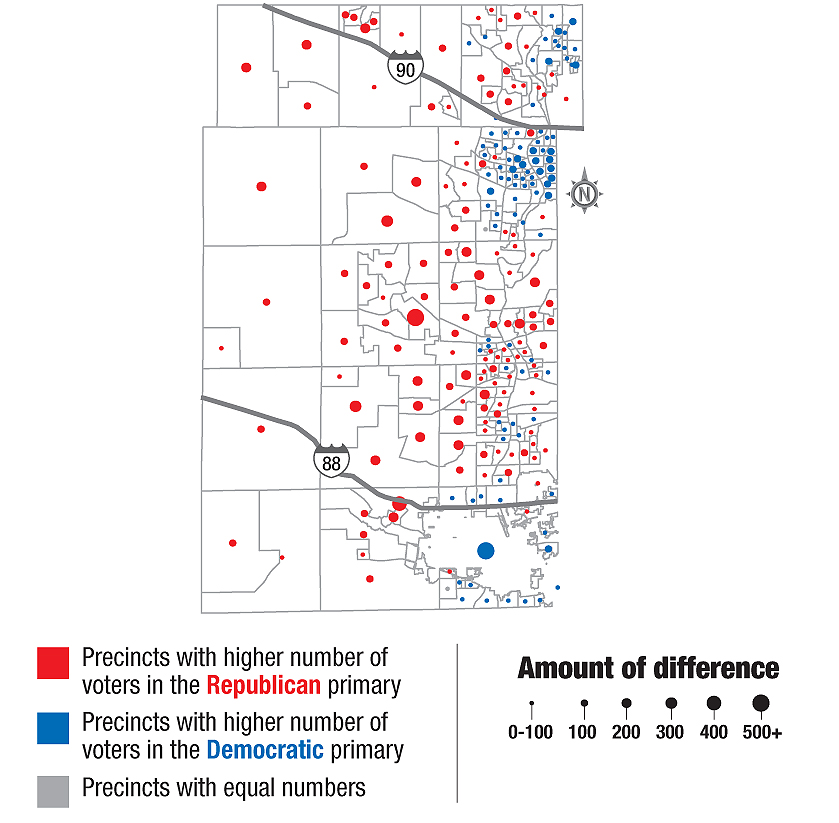 Most of Kane County's geography is covered by red dots on the map, where Republicans were the majority of voters last month.

But Democrats made up majorities in a lot of precincts in the county's two biggest cities, showing swathes of blue in Aurora and Elgin.

Those differences can be seen in the county's representation in Springfield, where state lawmakers from Aurora and Elgin are Democrats and those from Geneva and St. Charles are Republicans. 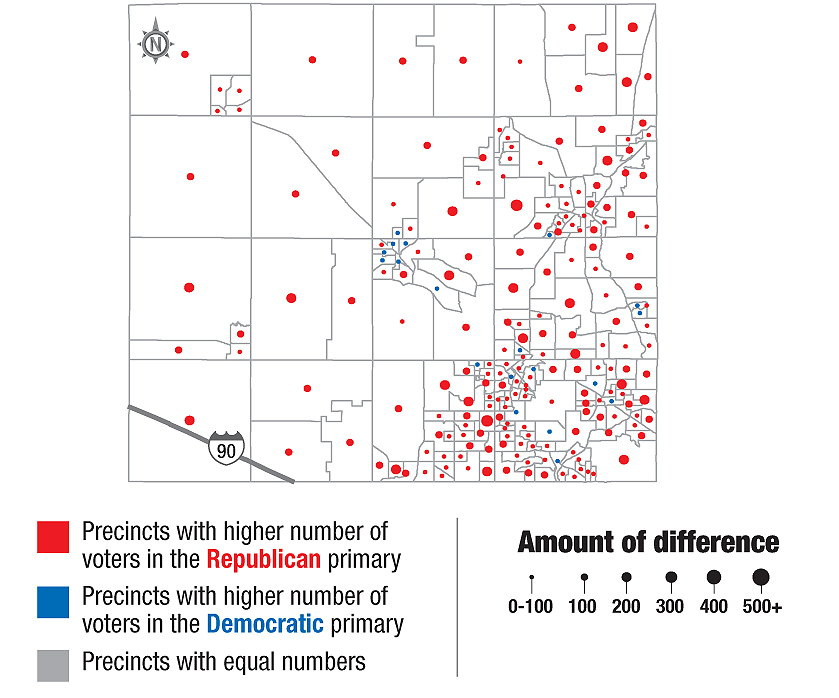 As the only collar county to vote for Romney in 2012, McHenry County won't surprise many people by being full of precincts of majority Republican voters.

There are a few small exceptions: a few Crystal Lake and Woodstock precincts pulled a majority of Democratic ballots. 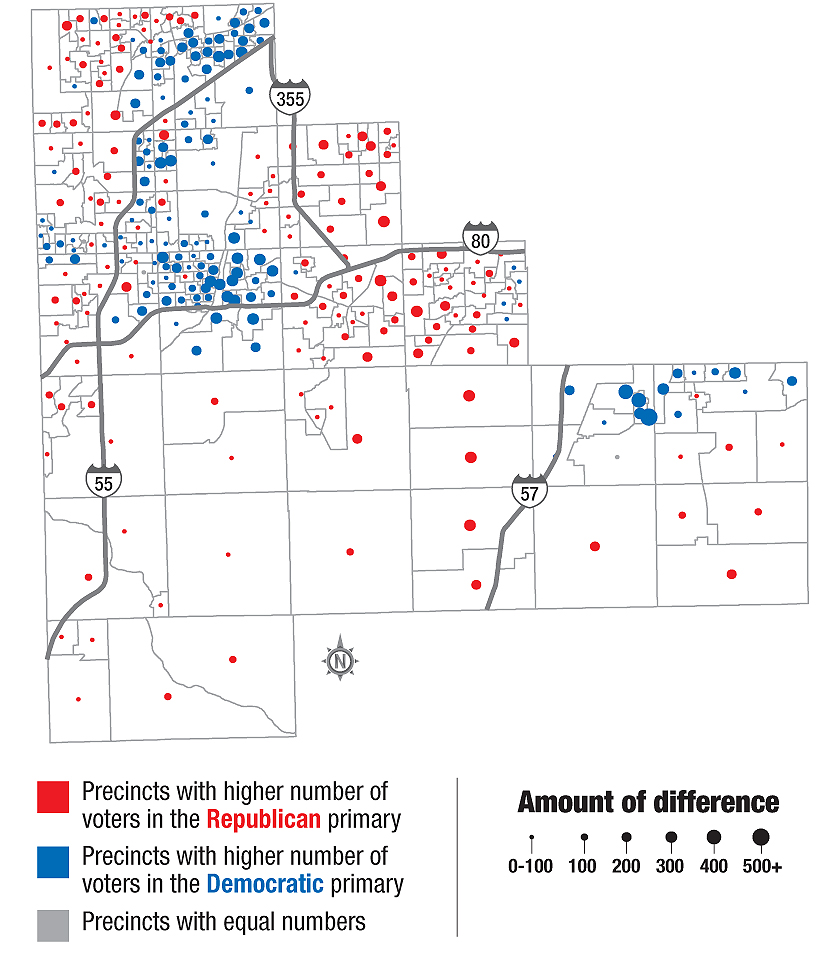 Like its larger counterparts Elgin and Aurora, Joliet in Will County turned out mostly for Democrats. So did a lot of Bolingbrook, according to the maps.

Most of the rest of central and southern Will County pulled majority Republican ballots.