St. Charles East didn't have enough players for the JV game scheduled in Lombard that Saturday, a day after a matchup between the schools' varsity teams. Glenbard East Assistant Principal for Athletics and former Chicago Bears wide receiver D'Wayne Bates found another opponent in time for his Rams, who ended up beating Cicero-based Morton High School 38-6.

The scenario replays across the suburbs this fall as young teams, from junior varsity down to youth leagues, feel the biggest pinch after a decade of declining participation in suburban football programs that many trace back to fears about concussions.

"It's funny, just a couple of years ago, the coaches and ADs really thought it was a pretty good overall picture for football," Barrington High School Athletic Director Mike Obsuszt said. "But the landscape is changing, and I feel like more changes might be on the way."

The number of athletes taking part in football at 87 suburban high schools dropped 18.7 percent over the past decade, an analysis of school records by the Daily Herald and Chicago Sun-Times showed.


by signing up you agree to our terms of service

But the number of players on sophomore teams is down 42.5 percent since 2008 at the 41 suburban high schools that broke down participation by program level. The number of players on freshman teams declined 29.1 percent. In some cases, separate sophomore teams were eliminated entirely, leaving fewer options for schools that still have them to compete. 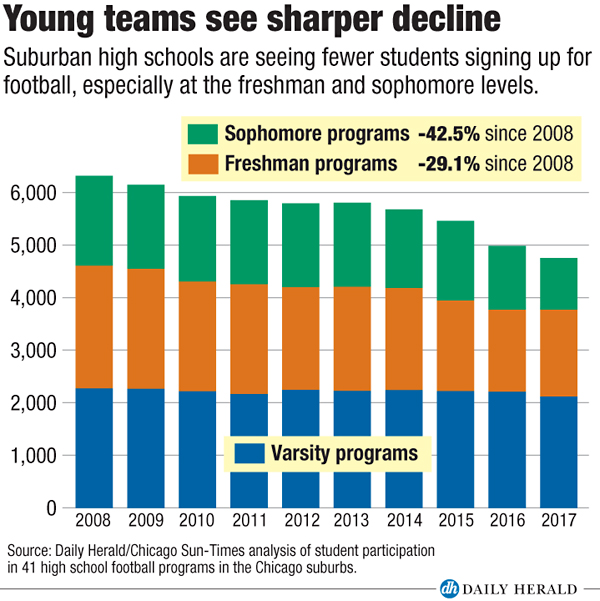 The Bill George Youth Football League had 156 teams this year compared to about 190 in 2012, board President Jerry Miller said. The tackle league has teams in Arlington Heights, Bartlett, Hanover Park, Carol Stream, Palatine, Wheaton and Glen Ellyn, among others.

The Chicagoland Youth Football League, which has players from 38 communities in the Chicago area and southeastern Wisconsin, peaked at about 9,800 players in 2008 and is down to roughly 6,700 this season, President Geoff Meyer said.

Football coaches, athletic directors and parents give many reasons for the drop in players -- competition from other sports such as soccer, increased pressure for young athletes to specialize rather than compete in several sports, and even the time demands of online activities.

But they say concerns about the long-term fallout from blows to the head accounts for most of the decrease.

"'Concussion' is a big word out there, a big medical term right now, and it's probably scaring families away," Bates said.

Many coaches say the game is safer than ever. But it's hard to counter reports like the one out of Boston University this fall, which said former football players who started playing tackle before age 12 were more likely to have emotional, behavioral and cognitive problems later in life. The study's authors say there is not yet enough data to be definitive about the risks, but the report resonated.

Even legendary former Chicago Bears Coach Mike Ditka, speaking on "Real Sports with Bryant Gumbel," said if he had an 8-year-old son today, he wouldn't tell him to play football.

"You have all that information, and parents start making decisions about not letting their kids play football. And that's when the youth numbers really start to go lower," Obsuszt said.

Meyer contends the dwindling numbers are not just related to concussion concerns. "It's 'Generation Me,'" he said. "It's a lazier society. Kids get their competitiveness by being on their computers and cellphones."

But player safety is still the biggest obstacle to overcome, many believe.

This fall, just 11 boys showed up for Highland Park's tackle program for fifth- to eighth-graders, and parks officials canceled it.

Park district Executive Director Liza McElroy said flag football is flourishing, with about 100 kids in grades one through eight. In Evanston, a flag program for sixth- and seventh-graders attracted about 150 kids this season. Yet, the 5-year-old Northwest Flag Football League in Palatine canceled play this year because it had too few players.

Denise Smith and her husband Scott recently decided their 6-year-old son Cameron will not play tackle football. "He wants to play flag football and maybe we'll allow that because I don't want to take away from his youth, but are we opening Pandora's box by allowing him to play flag football?" Denise says. - Rich Chapman/Chicago Sun-Times

Crystal Lake resident Denise Smith and her husband, Scott, recently decided their 6-year-old son Cameron will not play tackle football. Denise Smith, a physical therapist who works with a concussion specialist, said she sees the effects of head injuries each day at work.

Back at the high school level, West Chicago's freshman team had just six bench players when it played East Aurora early in the season. West Chicago has 69 players on two teams this season compared to 153 on three teams a decade ago, a 55 percent decline.

"Our Friday nights are still packed houses and excitement all around school that day," he said. "It's tough to play the West Auroras and Wheatons because they have higher concentrations of football players and we don't, but that takes nothing away from the desire and interest and thrill to play from our teams."

Athletic directors and coaches say they've made the high school game safer, focusing on proper technique, rarely tackling during practice, and identifying potential concussions and removing those kids from the game. They want to find a way to bring the game back and say one way to do it is by promoting all they've done to protect athletes.

"Honestly, if I could go back and play in this generation, I might play another 20 years," Bates said. "We need to come up with some game plan to motivate our kids to come back to football. America, this is the one country that thrives on football. This is our sport. And we want to make sure we do our part to have it continue to grow."