Suburban voter turnout down, hot races or not

Just months after a presidential election that brought political passions to a boil, suburban turnout in the April 4 local elections declined -- even in places with some of the hottest races.

The percentage of registered voters who cast ballots in this month's election of municipal, school and other local leaders was lower that it was in the similar election four years ago in suburban Cook, DuPage, Lake, McHenry and Will counties. Only in Kane County did turnout increase.

County-level turnout can be brought down by the high number of uncontested races, which draw less voter interest. More than two out of three local races were uncontested, more than in previous years, a Daily Herald analysis found.

But turnout also dipped in some places with fiercely fought local contests, an examination of precinct-level results shows.

"While I do think many people were energized on both sides of the aisle by the presidential election, a lot of people still don't realize the importance of local politics, local races for office," said Sarah Brune, executive director of the Illinois Campaign for Political Reform. "These mayoral and city council races, these are the people that really make decisions that impact your life."

Local election participation always is far below the turnout in national elections, and this year was no exception. Turnout in November ranged from 66 percent to 74 percent in suburban counties.

While November's results energized some voters and enraged others, there's little indication that resulted in increased voter engagement at the local level, even on hot-button issues. 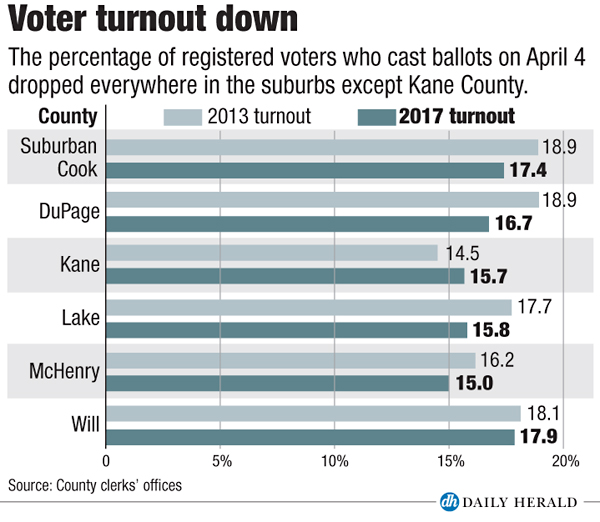 In the Palatine-Schaumburg High School District 211 board of education race, six candidates ran for three seats after the school board agreed to allow a transgender student limited access to a girls locker room and set a policy allowing transgender students to use the bathrooms of the gender with which they identify.

Turnout in the nationally watched race rose to 12.8 percent this year as voters elected two incumbents and a former board member. That compares to 9.6 percent turnout in the 2013 school board race.

Some contentious races this year resulted in modest decreases in turnout rather than any increase.

In Wheeling, longtime Mayor Dean Argiris had been accused of improper personal use of a village credit card and vehicle, which he denied. He was ousted April 4 in an election that brought out 11.7 percent of registered voters, compared to 15.6 percent in the 2013 mayoral election.

In Des Plaines, a divided council battled for months with Mayor Matt Bogusz over whether the city should cover council members' health care, pay for a municipal "rebranding" campaign and use lie detectors to seek who leaked confidential information to a reporter. Turnout in the city council race was 18 percent, down from 22.8 percent in the 2013 council race.

In Elgin Area School District U-46, the suburbs' largest school district, five candidates split over charter schools and school choice, transgender policy and a social studies curriculum some said was "against white males."

Some local races bucked the trend.

A campaign to borrow $24.2 million for school additions and renovations pushed turnout to 26 percent this year in the Glen Ellyn Elementary District 41 school board race, up from 11 percent in the 2013 race.

And the Mundelein mayor's race pitting incumbent Mayor Steve Lentz against Holly Kim and Ray Ladewig brought out 20.5 percent of registered voters, up from 16.5 percent in the mayoral race four years ago. Lentz's 2015 Fourth of July speech decrying same-sex marriage became an issue, as did forums organized by Kim about staging public protests and knowing your rights when dealing with police. The tight race between Lentz and Kim could be decided today with a count of mailed and provisional ballots.

The overall drop in turnout mirrors a downward trend in the number of candidates.

Barely 30 percent of the hundreds of races in the April 4 race were contested, a Daily Herald analysis showed. That's down from about 45 percent of races contested in local elections eight years ago.

Kent Redfield, professor emeritus of political science at the University of Illinois in Springfield, noted patterns of voter interest develop over years, not as a result of a single heated election.

"Change doesn't happen overnight. ... It has to ripple out over time," he said, adding other markers also gauge voters' engagement in the political process, "like volunteering and doing things more than showing up at the polls."

Redfield said those hoping for a re-energized electorate shouldn't read too much into bumps in turnout in places like District 211.

"You had something that was very visible, that generated some more attention and activity than what might be the baseline," he said. "But on the other hand, getting excited about going from 9 percent to 12 percent, reading that as a rebirth of citizenship, is probably not justified."

Besides, he said, if it's "circuses and crises that are driving people to participate and engage in government, then I don't think it's a particularly good formula."

graphic
Tepid turnout
Comments
Article Comments ()
Guidelines: Keep it civil and on topic; no profanity, vulgarity, slurs or personal attacks. People who harass others or joke about tragedies will be blocked. If a comment violates these standards or our terms of service, click the X in the upper right corner of the comment box. To find our more, read our FAQ.