Soccer was the thread that bound the Crawford family together. Thursday night, like other nights, was a time to enjoy the sport they loved.

But before Kevin Crawford, his wife, Anita, and their 20-year-old daughter, Kirsten, could get to the game at Lattof YMCA in Des Plaines, their lives ended tragically.

The Arlington Heights family members were turning into the parking lot when their car was struck by another vehicle speeding at an estimated 100 mph on Northwest Highway. The impact left the Crawfords' Chevrolet Impala mangled and hardly recognizable, and the Mercedes-Benz driven by 21-year-old Piotr Rog crushed to at least three feet shorter than normal.

All four died as a result of the crash, described by Des Plaines Police Chief Bill Kushner as the worst he's seen during his 40-year career in law enforcement.

The damage was consistent with an incredibly high rate, he said, and there was "no indication that there was ever an attempt to stop." Kushner said officials won't be able to determine the exact speed until investigators recover and analyze the "black box."

As news of the crash spread Friday, tributes poured in from friends, co-workers and others who knew the victims.

"He was selfless, the kids were great, and she was the nicest person in the world," said Michi Mho, president of the Chicago Fire Juniors Gold Soccer club, which Kevin Crawford founded in 2011. "As part of the soccer club, it was always about the kids first. It was all about getting the kids to play and exercise, and to an extent get them off the streets and give them something to do."

A preliminary investigation showed Rog, of Des Plaines, was driving the Mercedes-Benz west on Northwest Highway just before 9 p.m. when it struck the Crawfords' vehicle, which was turning left from the eastbound lanes. 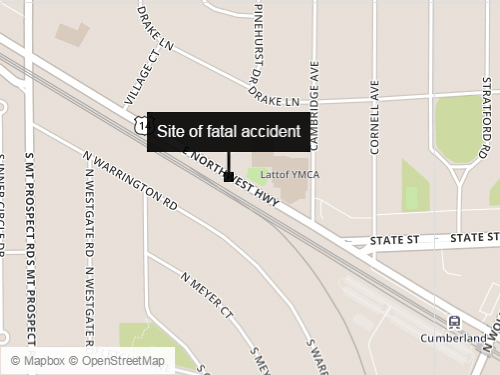 Kevin Crawford, 52, who was driving the Impala, died at the scene after Des Plaines firefighters pulled his body from the wreckage. Anita Crawford, 50, was taken to Northwest Community Hospital in Arlington Heights, where she died. Kirsten Crawford died while undergoing a CT scan at Advocate Lutheran General Hospital in Park Ridge, Kushner said.

Piotr Rog, driver of the Mercedes-Benz that struck the Crawford family car Thursday night. Rog, and Kevin, Anita and Kirsten Crawford all died in the crash.

Rog died at the scene. A passenger in his car was taken to Lutheran General and was listed in extremely critical condition.

The two people in the Highlander were treated at the scene and released with minor injuries.

A portion of Northwest Highway was closed for several hours while the crash was investigated. Police have not determined whether drugs or alcohol were involved. The crash remains under investigation.

Records show Rog had his license suspended three times due to speeding violations -- in April 2013 for three months, September 2015 for six months, and October 2015 for one year. Rog had a valid driver's license when he was driving Thursday night, said Dave Druker, a spokesman for the Illinois secretary of state's office.

Immediate surviving Crawford family members include a 10-year-old boy, Christian, and 15-year-old girl, Hailee, who are both staying with their grandparents. Neither child was in the car when the crash occurred.

Kushner said Des Plaines officers have started to collect funds for the surviving children. One can drop off donations in an envelope at the desk at the police station, 1418 Miner St.

All of the Crawford children participated in the Mount Prospect-based travel soccer club, a program for boys and girls ages 7 to 19. Under Kevin's leadership, the club grew from six to 27 teams, Mho said.

The family often let newly hired soccer coaches, many of them from England, stay at their house in Arlington Heights.

Matthew John Hodgson was one of the first coaches Kevin Crawford hired when he started the club. Hodgson, who was 25 when he was hired, said Kevin helped him be better at his job by encouraging him to look at the big picture.

"I wasn't as good as I thought I was," Hodgson said. "He helped me develop myself from just being a soccer coach into an all-around educator."

Jack Mauro's twin daughters played for the soccer club and he became friends with Kevin Crawford during that time. Mauro said Kevin's philosophy was that every child got a chance to play during games.

"It was not about wins. It's about developing technical skills of the game, teamwork, camaraderie, good sportsmanship and being a gracious winner," Mauro said.

Kevin Crawford also spent years in the insurance industry and since 2015 had been running his own branch in Mount Prospect.

"I would epitomize him as a true professional," said Jon Robb, Kevin Crawford's district manager at Farmers Insurance. "We were shocked when we found out about it."

Anita was an employee of Aon Hewitt and recently was working for her husband's insurance agency, Mho said. Kirsten Crawford, a 2015 graduate of Prospect High School, was enrolled at Harper College. Anita and Kirsten were part of an adult women's soccer league that plays some of its games at the Lattof YMCA.

Neighbor Carolyn McAleer of Arlington Heights played soccer with Anita at the YMCA, and their daughters also played together. She described the Crawfords as well-liked in the neighborhood, where they lived for at least 20 years.

"Everything those two parents did was for their kids," she said.

David Khuder, 24, a friend of Rog, grew up about a block away from him in Des Plaines and often ate dinner at the family's house. They met in high school at Maine West and later attended classes together at Oakton Community College.

Khuder said he used to ride motorcycles with him.

"I took him to buy his first bike. I warned him so much: Always wear protective gear, always slow down," said Khuder, explaining how Rog understood the danger of two-wheel driving. "He was very cautious with me."

"He had just bought that car (Mercedes-Benz) last year. He was probably just showing off for his friend and that happened."

Des Plaines Police Chief Bill Kushner said Des Plaines officers have started to collect funds for the surviving Crawford children. Anyone can drop off donations in an envelope at the front desk at the police station, 1418 Miner St., Des Plaines. For information, (847) 391-5400.
Comments
Article Comments
Guidelines: Keep it civil and on topic; no profanity, vulgarity, slurs or personal attacks. People who harass others or joke about tragedies will be blocked. If a comment violates these standards or our terms of service, click the X in the upper right corner of the comment box. To find our more, read our FAQ.