Up to 70 percent of students still unprepared, tests show

Preliminary statewide results from standardized testing show anywhere between 60 percent and 70 percent of Illinois students are not ready for college or careers after high school.

The data shows slight declines in the percentage of students meeting or exceeding expectations in English language arts/literacy across grades and an uptick in mathematics. But there is a significant drop-off in math between eighth grade and high school -- a dip from 31.8 to 21.8 percent. 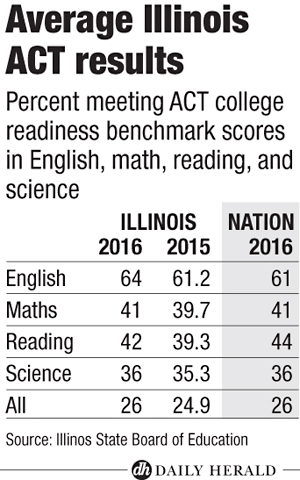 "This data isn't shocking," State Superintendent of Education Tony Smith said. "This is the part that is sobering. There is considerable distance to travel to have every single one of our young people ready for what lies ahead. We have a lot of work to do across Illinois to really have kids ready to engage meaningfully and successfully" for college and careers.

Smith cautioned PARCC is a different kind of test aligned to national assessments of readiness.

"It is actually now connected to daily practice and classroom instruction," he said.

The test aligns with the more rigorous Illinois Learning Standards and focuses on students' mastery of key concepts, as well as critical thinking and writing skills. It aims to give teachers, schools, students and parents a better idea of whether students are on track in their learning and for success after high school. It also is meant to help teachers customize learning to meet student needs.

A few things changed with the PARCC test last spring from the previous year: There was only one testing window, the total test time for most students was 90 minutes shorter, it was a simpler format, and a greater percentage of students -- 85 percent versus the previous year's 75 percent -- took the test online.

The preliminary data includes online and paper-and-pencil tests, and still is comparable to the previous year's results, officials said.

School districts have been receiving individual PARCC student results for the past several weeks, yet the complete report card, including finalized statewide, district-level and school-level data, won't be available until Oct. 31.

While students in third through eighth grades will continue to take the PARCC assessment through the 2017-18 school year and likely beyond, the state dropped the test for high schoolers this year, replacing it with the SAT college admission exam for all high school juniors.

The state will provide the SAT exam, including a writing component, at no cost for this school year. Illinois stopped funding the ACT college entrance test, which had been administered for free to 11th-graders for 15 years.

School districts will have the option of voluntarily offering PARCC testing in high schools this year at the state's expense, officials said.

While it's unclear what the high school PARCC results will mean in the future, Smith still thinks it is a worthwhile measure for schools.

Considering college remediation rates, getting students to graduate isn't enough, Smith said; rather, it's about making sure students are "ready for participation in the world."

related
graphic
Preliminary PARCC scores
Comments
Article Comments
Attention: We are experiencing technical difficulties with our Facebook Comments module at this time. Comments will remain disabled until we are able to resolve the problem. We apologize for the interruption. We invite you to engage with our content and talk with other commenters on our Daily Herald Facebook page at https://www.facebook.com/DailyHeraldFans/. Thank you.