Each Illinois legislator costs us an average of $100,000 a year

That's according to a new study released by the Illinois Policy Institute today that shows $18,094,238 was spent on salaries, stipends, benefits and reimbursements for 181 current and former legislators in 2015.

"The state can't pay its bills to those who have done work for us, but somehow the legislators are still ensuring they are getting paid before everyone else," said Ted Dabrowski, vice president of policy and co-author of the Illinois Policy Institute's report. "When it's all added up, you're talking about a really high price tag for politicians that haven't delivered."

The Illinois Policy Institute is a conservative research organization that tracks and analyzes government spending.

Dabrowski complained that the state's economy has stagnated during a two-year budget stalemate between the legislature and Gov. Bruce Rauner. The governor, he noted, takes a $1 salary and receives no health insurance or pension benefit.

"State politicians have done nothing to stop Illinois' unpaid bills from growing or its credit rating from falling," the report's preamble reads. "They've failed to pass comprehensive spending, pension and economic reforms to prevent Illinois' fiscal collapse. Yet despite these politicians' inaction on critical problems plaguing the state, Illinois taxpayers are still forced to pay for the cost of their legislature."

Some legislators argue that work is being done, though admittedly not at the pace many taxpayers may expect.

"I understand people's frustrations," Villa Park Democratic state Sen. Tom Cullerton said. "It's been both sides' fault, and what we've been doing the past couple months is finding middle ground instead of spinning our wheels."

Cullerton is one of fewer than two dozen legislators who do not receive health insurance coverage through the state or participate in the General Assembly Retirement System. 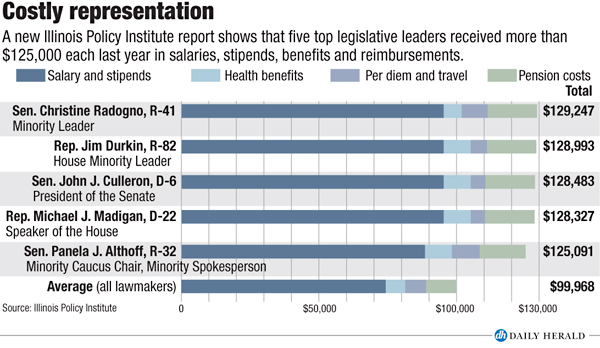 Before the recent stopgap budget was approved last month, legislators had gone a few months without being paid. The legislative costs are also less than half of 1 percent of what the state is expected to spend this year, according to a Commission on Government Forecasting and Accountability report.

In recent years, the legislature also has lowered its per diem amount from $132 to $111 and reduced the mileage reimbursement rate as well.

The vast majority of the costs are tied to salaries and leadership stipends. Combined salaries and stipends cost taxpayers $13.4 million in 2015.

Legislators made a base salary of $67,836 in 2015. According to an annual salary study by the National Conference of State Legislators, base salaries for Illinois legislators are more than twice their counterparts in Iowa and Indiana, almost double what Missouri legislators make and almost $17,000 more than Wisconsin lawmakers.

More than two-thirds of the legislature also receives some kind of leadership stipend as well -- for presiding over a committee or being tabbed a party leader -- ranging from $10,326 a year to as much as $27,477 annually, according to the report.

Radogno, a Lemont Republican, eked out the three others for the top spot with a total cost of $129,247. 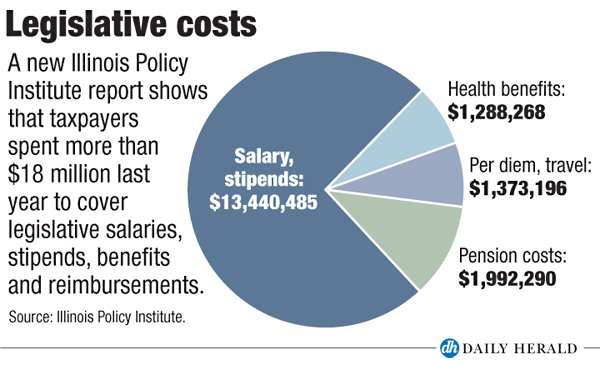 Radogno spokeswoman Patty Schuh noted the Illinois Policy Institute's research didn't take into account the state plane commonly used to shuttle Democratic leaders back and forth between Chicago and Springfield.

The report details other specific costs of legislators:

• Taxpayers covered almost $1.3 million in individual health insurance costs for 143 of the legislators.

• Only eight legislators did not claim any type of travel reimbursement, while the other 173 combined for $396,739 in travel costs in 2015.

• Only 23 legislators collected a per diem for all 55 days that were paid in 2015. The grand total for legislative per diem disbursements last year totaled $976,457.

• While 44 legislators opted out of pension benefits, the others combined to cost taxpayers nearly $2 million to cover the "employer" contribution.

While it is becoming commonplace for newer legislators to forgo many of the taxpayer-funded benefits offered to legislators, only 20 current or former legislators -- 15 Republicans and five Democrats -- turned down health care and dental insurance coverage as well as a pension, according to the data.

"There are an increasing number of people, particularly those from the class of 2012, who are not participating in these types of benefits," said Barrington Hills Republican David McSweeney. "We can't be hypocrites and need to lead by example."

Pensions are also far more lucrative for any legislator in office before 2011. Legislators can receive 85 percent of their final salaries after just 20 years in office. Most public pensions require 35 years of work or more and max out at 75 percent of an average of the top four highest-paid years. Reforms to the state's pension laws enacted in 2011 limited benefits to newer employees and elected officials.