Illinois, already 11 months behind in the race to come up with a budget for this year, has now been lapped by several U.S. states.

Eleven states have approved two state budgets in the time Illinois has failed to finish one, according to research from the National Conference of State Legislatures.

After Pennsylvania approved a stopgap plan in March that ended its monthslong stalemate, Illinois became the lone state without a budget for the fiscal year that began July 1.

Not all states adopt a yearly spending plan. Of those that do, 11, including Florida, Maryland, New York and Colorado, have a spending plan for the current fiscal year as well as the next.

Doubts remain that a compromise can be reached in Springfield before the new fiscal year begins on July 1.

Both Republicans and Democrats have been vocal about the stalemate but haven't yet finished a budget.

"It's outrageous, it's unacceptable, it's unnecessary," said state Sen. Daniel Biss, an Evanston Democrat. "We're doing a lot of damage to the state of Illinois for no good reason."

"Frankly, I think we should all be embarrassed that we haven't gotten this done in the last year. It's just ridiculous," he said this week. 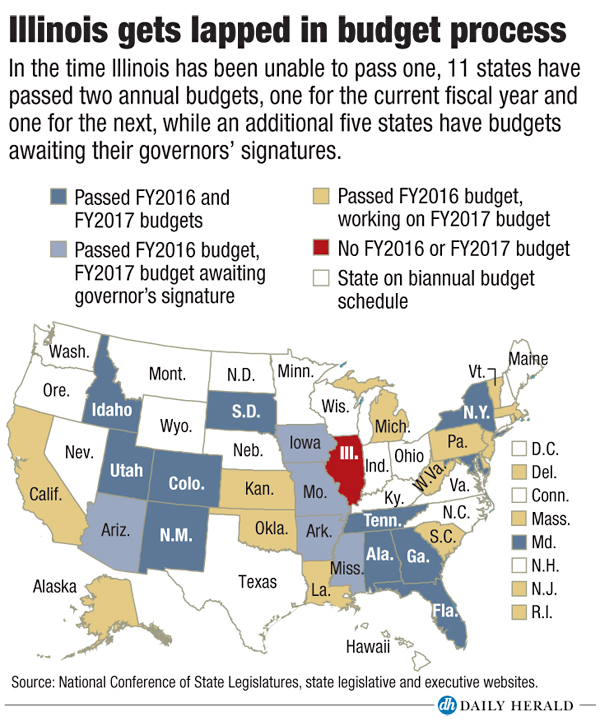 This week, a few budget-related proposals stalled. Neither a measure that would open the door for a graduated income tax nor a plan to retool the school funding formula was called for a vote. Constitutional amendments to eliminate the lieutenant governor's office to save money and change how legislative districts are drawn failed this week as well.

But the legislature managed a bipartisan compromise in April to get much-needed funds to community colleges, universities and the Illinois Math and Science Academy in Aurora.

And the Senate approved an additional $454 million in higher education funding on Thursday, which will move to the House for further debate.

Rank-and-file members are attempting to hash out a spending proposal behind closed doors, but an eventual deal will require Rauner's signature.

For now, the stalemate continues. And the list of states that have passed two budgets in the time that Illinois has failed to pass even one is likely to grow. Legislators in five more states -- Arizona, Arkansas, Iowa, Mississippi and Missouri -- have sent annual spending plans to their respective governors for approval.

Comments
Article Comments
Attention: We are experiencing technical difficulties with our Facebook Comments module at this time. Comments will remain disabled until we are able to resolve the problem. We apologize for the interruption. We invite you to engage with our content and talk with other commenters on our Daily Herald Facebook page at https://www.facebook.com/DailyHeraldFans/. Thank you.