Pyke: Are dangerous merges to blame for more I-90 crashes?

With seconds to merge into traffic you can't see, the Arlington Heights Road interchange with westbound I-90 is a heart-stopping, adrenaline-pumping thrill-ride no one wants to take.

If you take it slow, it's dangerous. If you speed up, it's dangerous. The situation begs the question: Are ramps that shoot drivers out like ejector seats onto the mainline and ad hoc lanes contributing to crash increases in the Jane Addams Memorial Tollway (I-90) construction zone?

A Daily Herald analysis before and after the rebuild and widening of I-90 between Rockford and O'Hare International Airport shows a 20 percent jump in every type of collision, from minor ones to fatalities.

"Low-speed fender-benders account for the majority of traffic crashes in 2015, which is common in construction zones where speeds are slower, roads are more congested and drivers may not be familiar with new traffic patterns or lane shifts," tollway spokesman Dan Rozek said. "Typically, these are rear-end crashes when someone suddenly stops.

"The number of serious crashes last year on I-90 was the lowest it's been in seven years. Tollway construction and engineering staff carefully evaluate work zone traffic configurations," Rozek added, "as the new traffic patterns are put in place to allow safe and convenient access."

Not everyone's convinced. "I have seen more dangerous conditions on (I-90) since they started construction. Everyone I talk to is afraid to drive there," said reader John Koclanis, who drives between Cary and Addison several times a week.

Asked about stressful merges, Rozek acknowledged that with construction "the length of the merge into traffic and exits onto ramps on I-90 is shorter than under normal conditions, however all of the entrances and exits are designed for safe access into the 45 mph work zone. We provide construction signage, including merge signs on the ramp and the mainline, to advise drivers of entering traffic."

The first stage of the project from Rockford to Elgin was built between 2013 and 2014. The second phase, which started in 2015 and finishes this year, is between Elgin and O'Hare. 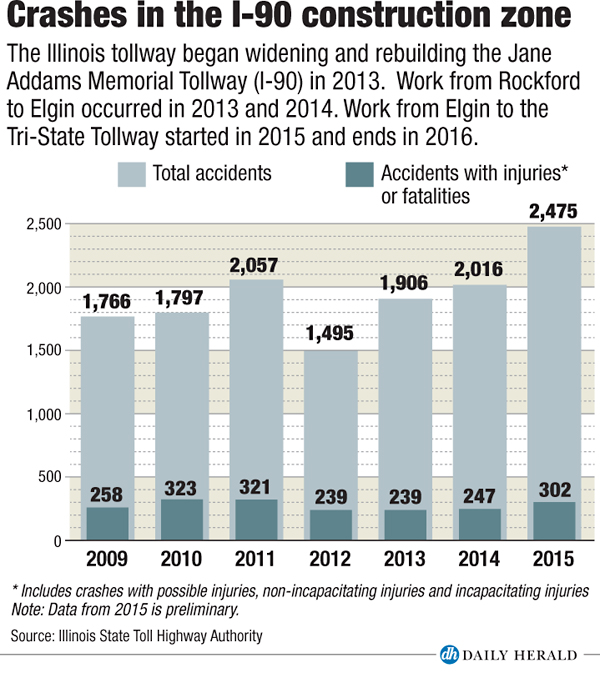 Here's a closer look at the numbers:

• Total crashes, including property damage and injury, averaged 1,779 annually between 2009 and 2012, data from a Freedom of Information Act request showed. After the project started three years ago, that number grew to 2,132 on average between 2013 and 2015. Last year, crashes reached a seven-year high of 2,475.

The first fatal crash of 2016 occurred March 25 when a limousine hit a barrier and rolled over near Route 25, killing a female passenger and injuring seven others. The driver claimed he was blinded by the sun. Another death -- unrelated to traffic -- happened April 5 when an I-90 worker was struck by a steel beam in Des Plaines.

Entering westbound I-90 from southbound Arlington Heights Road is tricky at best. Concrete traffic barriers reduce visibility to merging traffic and give the feeling that you're coming out of a cattle chute. - Jeff Knox | Staff Photographer

Who or what's to blame?

"It's a combination of behavior and the road itself that really leads to crashes," said engineer Greg Cohen, who heads up the American Highway Users Alliance, a nonprofit that includes both motorists' and trucking associations. Speeding combined with Jersey barriers, narrow lanes, low visibility, disappearing shoulders and unfamiliar configurations can be fatal, Cohen said, adding his wife calls some scenarios "merge or die."

Cohen also noted that as the economy improved more drivers returned to work in 2015.

Got a concern or question on I-90 road work? Drop me an email at mpyke@dailyherald.com.

Bob Fox of Crystal Lake is skeptical about Metra's plans to try out security cameras in rail cars. "What has this world come to?" he asked. "What crimes is Metra trying to prevent: snoring, reading, phones and computers too loud, saving seats? In the past, Metra has surveyed its riders to learn about their habits and interests. Metra should conduct a survey before spying on its customers. The money would be better spent on grade-crossing safety where the real damage is done."

• Watch out for congestion on Prospect Avenue in Itasca. Traffic will be shifted to the east with one lane in each direction as work begins on a new interchange with Route 390.

• The westbound ramp from Wacker/Lake Shore Drive to Upper Wacker closes as of Monday for six weeks for repairs.

Transit a sure winner for Cubs, Sox

Metra and the CTA are reminding baseball fans to pitch a change-up and take transit to U.S. Cellular and Wrigley instead of driving. Cubs fans can walk east from Union Station or Ogilvie Transportation Center to CTA Red Line trains and go north to the Addison stop. The same goes for White Sox nation, only you'll head south on the Red Line to the Sox-35th Street stop. There's also a Metra option to The Cell, by walking east to the LaSalle Street Station and catching the Rock Island Line to the 35th Street/Lou Jones Station.

What's next for Illinois' transportation infrastructure crisis? Wish I knew. Find out the answers from IDOT and regional planners of the Transportation Management Association at Lake Cook's annual meeting at 9 a.m. May 24, Baxter Healthcare, 1 Baxter Parkway, Deerfield. To RSVP, email tim_grzesiakowski@baxter.com.

related
Comments
Article Comments ()
Guidelines: Keep it civil and on topic; no profanity, vulgarity, slurs or personal attacks. People who harass others or joke about tragedies will be blocked. If a comment violates these standards or our terms of service, click the X in the upper right corner of the comment box. To find our more, read our FAQ.