With Gov. Bruce Rauner previewing his budget proposal for fiscal year 2017 (which starts in July), we took a look at three existing proposals for solving the state's budget crisis.

The proposals are from the Center for Tax and Budget Accountability, the Illinois Policy Institute and the Institute for Illinois Fiscal Sustainability at the Civic Federation.

Here's how they compare: 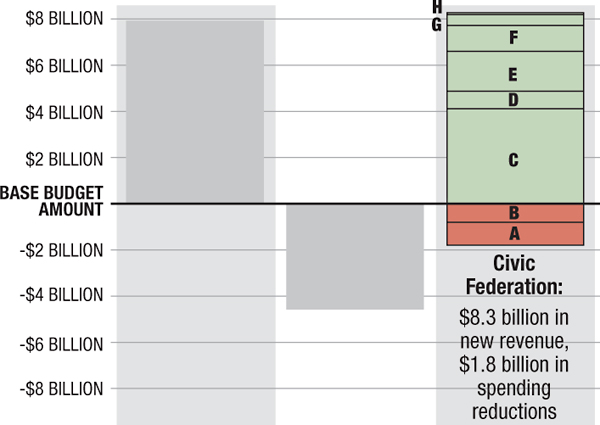 The graphic shows how much each plan would increase revenue or reduce spending -- or both. Where possible, figures are from each institution's reports and are estimates only.

Here's how each plan breaks down:

Center for Tax and Budget Accountability

The CTBA describes itself as a "bipartisan, nonprofit research and advocacy think tank." The board of directors can be found here.

The CTBA plan relies on new revenue sources to be used to pay off the bill backlog and make pension payments:

(Letters correspond with those in the graphic) 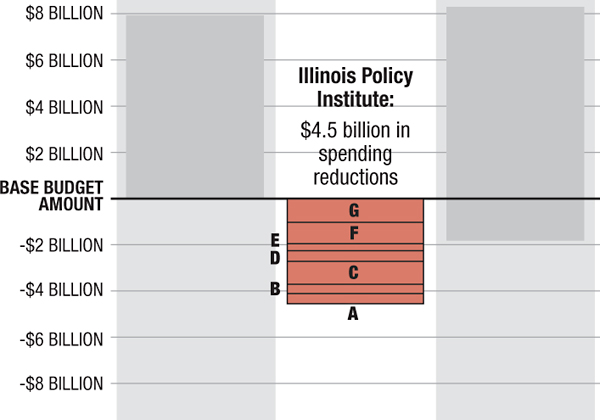 D) Eliminate certain business tax breaks (to be taxed at the 6% rate): $426 million

Current state law sets a pension payment schedule where payments from the state start low and rise as time goes on. Alongside new revenue, the CTBA recommends changing the repayment schedule so payments are at a constant, predictable level. Payments would initially be higher than set by current law, but eventually be lower.

The Institute describes itself as an "independent research and education organization generating public policy solutions aimed at promoting personal freedom and prosperity in Illinois."

The board of directors and other staff can be found here.

The institute's most recent plan was released in April 2014. At our request, here's how they updated it. 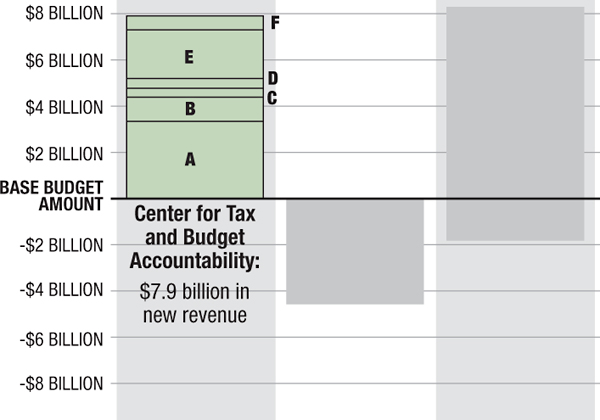 • Limit spending increases in the overall state budget to the rate of inflation and population growth.

• Strengthen the requirement for a balanced budget.

• Criminal justice changes to keep people out of prison and able to work.

• Move politicians and state lawmakers out of the pension system and into a 401(k)-style system.

The federation describes itself as an "independent, nonpartisan government research organization that provides analysis and recommendations on government finance issues for the Chicago region and state of Illinois." The board of directors can be found here.

The federation's plan, released by its research arm the Institute for Illinois' Fiscal Sustainability, proposes a mix of new revenue and spending reductions. 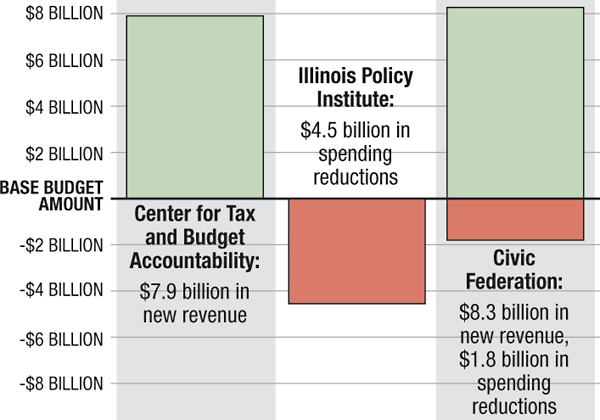 A) Unspecified cuts, as determined by negotiations between the General Assembly and the governor: $1 billion

B) The state would continue to manage local teacher pensions, but paying for normal costs would shift back to local districts in a three-year transition. Estimated savings after that transition: $800 million

C) Increase personal income tax rate from 3.75% to 5% (with an increase in earned-income credit for relief to low-income residents): $4.112 billion

H) Reduce the retailer's discount, given to offset the cost of collecting sales taxes: $85 million

• Use funds available in 2019 from retiring old bonds to make supplemental payments to the retirement system -- $364 million the first year, and $1 billion thereafter until the system is fully funded in 2043.

• Constitutional amendment to redefine pension protections to accrued benefits only, allowing state to make changes to non-accrued benefits for current and future employees.

• Establish reserve fund for use in fiscal emergencies (such as recessions) of about 10% of revenue after bill backlog is paid off.

• Pass a constitutional amendment to move from a flat tax to a graduated tax rate, to mitigate the effect of taxes on low-income residents.

• Once the budget is on sound footing, end sales tax on food and over-the-counter medicines and reduce the sales tax.

• End accounting practices that allow revenue from next year's budget to pay for current year shortfall.