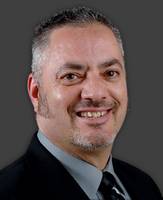 Joe Aguilar joined the Daily Herald as an assistant high school sports editor, serving as its first Lake County sports coordinator, in January 2001. He oversees our daily prep sports coverage in Lake County, assigning reporters and photographers to games, in addition to editing copy and writing game stories and columns. Joe anchors our prep football Web videos. Since 2006, he has been part of our Chicago Bears coverage and has made frequent television guest appearances on ABC 7's morning news shows.

Joe has covered professional golf, including multiple PGA Championship and U.S. Open tournaments, as well as the 2009 Solheim Cup, the 2010 Stanley Cup Finals and assisted with Cubs and White Sox games. He also lived the dream of skating in Wrigley Field in advance of covering the 2009 Winter Classic between the Blackhawks and Red Wings. In 2009, he served as a guest speaker at the University of Missouri during National Hispanic Month.

A native of Chicago and a lifelong Chicago sports fan, he grew up in Mundelein and attended Mundelein High School. He graduated from Northern Illinois University in DeKalb with a major in communications. He began his professional career as a radio sportscaster before embarking on his sports-writing career with the Waukegan News-Sun. He worked 11 years, including five as an assistant sports editor, for Pioneer Press Newspapers before joining the Daily Herald.

Joe and his family live in McHenry.