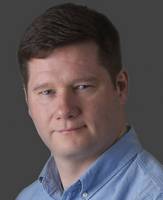 Lewnard has covered a variety of assignments during his employment with the Daily Herald, including the Chicago Bulls 1996 Eastern Conference Finals in Orlando, and the Chicago Cubs playoff series against the Los Angeles Dodgers during 2008. He is a graduate of Eastern Illinois University (BA-Journalism) and a graduate of St. Viator High School in Arlington Heights.

He enjoys sports including basketball and baseball, and is interested in railroad history.