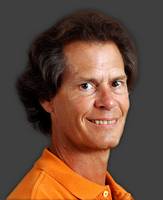 Dave Oberhelman joined the Daily Herald as a sports writer in 1999. His primary focus is high school sports in DuPage County and the Tri-Cities area.

Over the years he has covered a variety of sports from girls soccer to boys volleyball, from baseball to water polo, yet his emphasis has been beat coverage of football, boys basketball and track. Oberhelman also contributes a weekly column, "Sidelines," that highlights the "lighter side" of prep sports and achievements of area athletes.

Before joining the Daily Herald full-time, Oberhelman wrote for the newspaper as a correspondent serving the DuPage and Fox Valley offices. He came to the Daily Herald after also writing for such publications as the Chicago Tribune, The Chicago Reader and Windy City Sports Magazine, and having served in editorial positions for community newspapers in Chicago in an age when cut-and-paste meant literally that.

Seen on television broadcasts for the IHSA Network and Naperville Community Television Channel 17, Oberhelman had the privilege of covering each of now-defunct Driscoll Catholic High School's state-record seven straight state football titles, among the many state series contests he has covered for the Daily Herald.

In 2008, he was honored with a Recognition Award by the Illinois Track and Cross Country Coaches Association for his coverage of boys track and field.

Aside from the prep sports scene, Oberhelman has covered the occasional Chicago Cubs and White Sox baseball game for the Daily Herald, and assisted in coverage of the 2009 Winter Classic hockey game between the Chicago Blackhawks and Detroit Red Wings at Wrigley Field.

Oberhelman, raised in Wheaton and still residing in the DuPage County with his wife and two children, is a graduate of Wheaton Central High School. He attended Indiana University and earned a bachelor of arts degree in communications.