After years of construction projects chipping away at its reserves, Glen Ellyn Elementary District 41 leaders are saving again.

The school district increased its reserve fund by more than $4.6 million in 2017, up 36.4 percent from the previous year, according to Illinois State Board of Education financial reports. Now that its reserves are at more than 40 percent of annual operating expenses, the spike triggered a board-mandated spending plan. The state board recommends a minimum of 25 percent in reserve.

"If it's above 25 percent, there needs to be a plan to spend that down," said Eric DePorter, District 41's assistant superintendent for finance, facilities and operations. "Some of that is going to pension obligations, but we also have a number of health and life safety projects we've earmarked."

District 41 was not the only suburban school district where reserve funds grew last year, according to a Daily Herald analysis of 93 school district audits. Nearly two-thirds of the districts increased reserves from 2016 to 2017, the analysis showed. 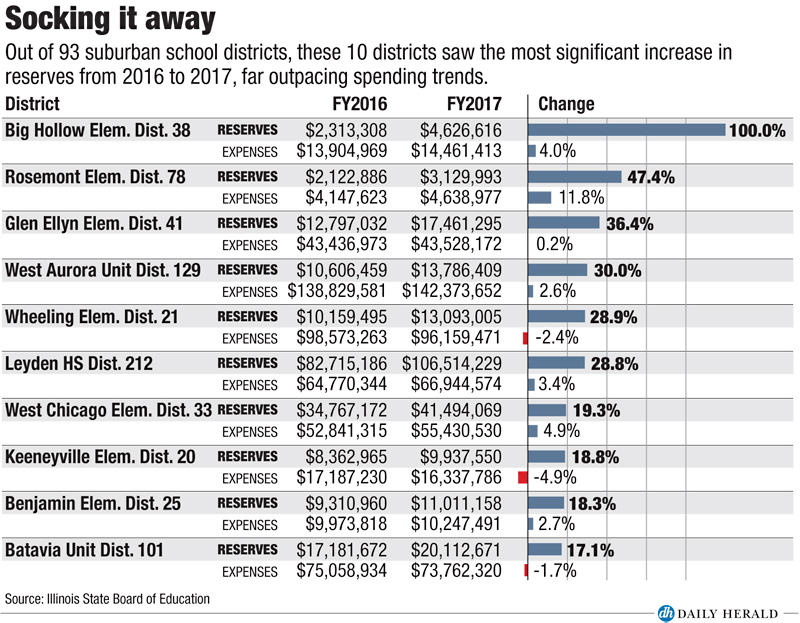 Eighty-seven of the suburban school districts were holding more than 25 percent in reserve, including 18 districts with enough in reserve to cover an entire year's expenses, according to the analysis. The state board does not set a recommended maximum for reserves.

In many cases, school districts levy an amount of taxes each year that helps them build up reserves, allowing them to avoid borrowing money and having to seek voter approval to do so.

"There is the argument that governmental units, just like people and businesses, should have a rainy-day fund to weather unexpected issues," said Carol Portman, president of the Taxpayers' Federation of Illinois, a Springfield-based public finance efficiency organization. "You want them to have the ability to cover blips in operating expenses and unexpected costs, but then the question becomes whether it is appropriate to save in advance for major capital improvements. You can make arguments either way."

Critics argue the districts are taxing for more than they need and saving money for projects that won't benefit those who paid for them.

Proponents say that by saving for future projects now, they are reducing future tax burdens.

Leyden High School District 212, which serves students from Rosemont and other parts of western Cook County, saw its reserves balloon nearly $24 million in 2017 because the district borrowed money ahead of a 30-month, $85 million construction and renovation plan.

"For many, many years we've been working to prefund these projects," said Tom Janeteas, District 212's chief financial officer. "The longer you wait on construction projects, the more expensive it gets year over year, and the reason for saving upfront was to combat rising interest rates."

Lisle Unit District 202 slashed its reserve fund by more than 20 percent after putting $11 million toward a $39 million construction plan for a new school. The district will draw down its reserves even more before the project is complete, Superintendent Keith Filipiak said.

Big Hollow Elementary District 38 in Ingleside doubled its reserves in 2017, part of an effort to shore up the district's finances that once required annual borrowing just to meet payroll, Superintendent Bob Gold said. The district saved money after bringing transportation and special education in-house and eliminating those outside contracts.

But the district also received a significant boost from state aid payments once the state passed a budget and released long-promised funds to schools. The district received more than $5 million from the state in 2017, up from $3.4 million in 2015.

"We've been slowly crawling out of a hole," Gold said.

Gold said the school board is focusing on student achievement and plans to use some of its reserves for new teaching positions.

"We have an aggressive staffing plan to add teachers to our load, and we can do that now because we're not borrowing money," he said.

graphic
School reserves
Comments
Article Comments
Guidelines: Keep it civil and on topic; no profanity, vulgarity, slurs or personal attacks. People who harass others or joke about tragedies will be blocked. If a comment violates these standards or our terms of service, click the X in the upper right corner of the comment box. To find our more, read our FAQ.