Why Illinois' personal income growth is 49th in nation

When those jobs go unfilled, the potential wages go unpaid.

"There's hardly anyone out there who can do the number of skilled jobs we have open. It's quite a drought," Carr said.

Carr's dilemma plays into Illinois' latest dubious distinction. The state ranked 49th, a hair above Nevada, in annual personal income growth from 2007 through 2016.

The weak income growth ties into some other dismaying benchmarks, like Illinois' worst-in-the-nation population loss last year and economic uncertainty tied to a yearslong political standoff during which the state had no budget. It renewed calls for more educational and job training efforts in the state to fill jobs like those at Carr's company.

"If there's no job growth, then there are no income increases," said Norman Walzer, senior research scholar and an economist at Northern Illinois University in DeKalb. 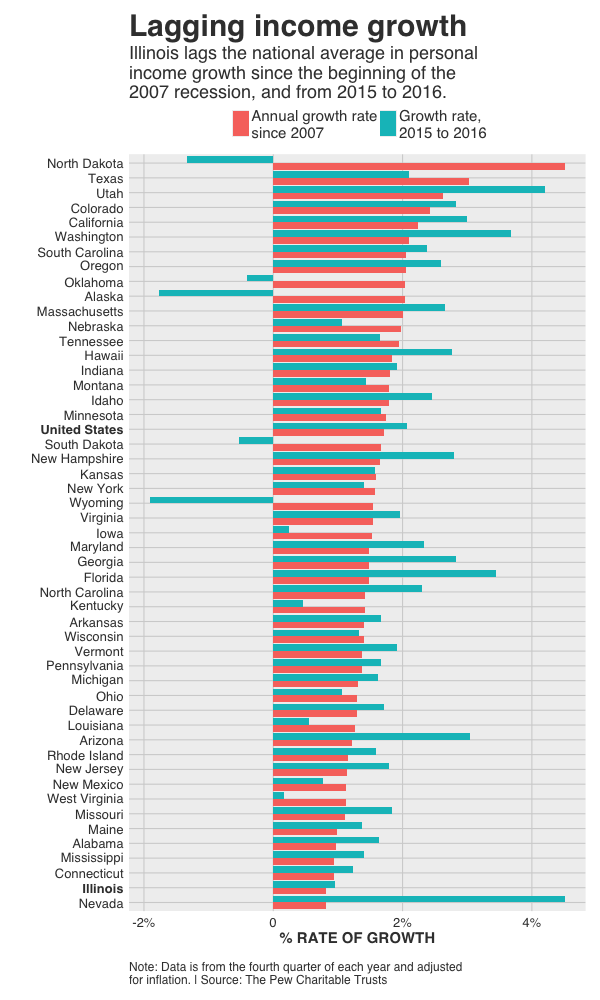 In contrast, the annual rate was 4.5 percent in North Dakota, which had the highest personal income growth in the nation over the decade but showed losses last year. Other states ranked high are Texas, Utah, Colorado, California, Washington, South Carolina and Oregon.

Why is personal income growth so important? Federal government officials often use this data to look at trends and to determine where to allocate support to states for certain programs, to set spending limits in budgets and to estimate needs for public services, said Ruth Mantell, a Pew researcher on the report.

Personal income includes a worker's paycheck, Social Security benefits, employer contributions to retirement plans and health insurance, income from rent, and benefits such as Medicare and Medicaid, according to Pew.

Illinois lost more population in 2016 than any other state, which also drags down personal income numbers because fewer people are earning wages. The population was 12.8 million in 2016, down 30,035 since 2010, according to U.S. Census Bureau data.

A lack of confidence in the state's economy and direction also hurts business growth, said Mark LaSpisa, president and managing adviser of Vermillion Financial Advisors Inc. in South Barrington. A deep rift between Republican Gov. Bruce Rauner and the Democrat-led legislature left Illinois without a budget from July 2015 until this month.

"Once Illinois decides to work on solutions rather than playing politics and to actually resolve many of our financial issues, Illinois will most likely return to being more popular than the surrounding Midwest states," LaSpisa said.

Walzer said the northern part of the state is doing better economically than the southern half. That's mostly because the Chicago area has been a driving force with its financial and tech industries.

"There also is a high number of people who could be in the workforce (in Illinois) but are not for various reasons, especially downstate," Walzer said. "Some companies are having a hard time getting people to fill open positions."

John Jackson, a political scientist with the Paul Simon Public Policy Institute at Southern Illinois University in Carbondale, said Illinois should invest more in education and in developing needed workplace skills. That could lead to higher personal income growth for Illinois.

"We have a service economy now in Illinois," Jackson said. "Service jobs are not as high paying and we have a lot of agriculture, which is stable, but also is not high paying. We need to train people for the global economy and the high-tech economy."