One result of the Illinois legislature's repeated failure to pass a budget is a big backlog of unpaid bills to companies and nonprofits that do business with the state or have contracts to care for the sick and needy.

In the suburbs, that adds up to $2.2 billion owed to more than 5,100 health care providers, local government agencies, small businesses and other state vendors.

That's according to the most recent figures released by Illinois Comptroller Susana Mendoza's office late last week that showed amounts owed to vendors in Cook, DuPage, Kane, Lake and McHenry counties from the state's general fund.

The amount is roughly 15 percent of the $14.7 billion the state owes all vendors. Chicago-based vendors are owed close to $5.6 billion, according to the comptroller's figures.

"It makes it tough, which shouldn't come as a surprise to anyone," said Mark Stutrud, CEO of Lutheran Social Services of Illinois, based in Des Plaines.

Lutheran Social Services shuttered several social service programs during the state budget crisis that began three years ago. At one point, Stutrud said, the charity was owed millions from the state, but that amount has shrunk in recent months. Lutheran Social Services is now owed close to $1 million, according to the comptroller's figures. Stutrud said that's mainly for providing mental health care.

"It's disgraceful, the whole situation," said Arlington Heights Republican state Rep. David Harris. "It significantly hurts these vendors and forces them in essence to be Illinois' banker by providing the dollars we use to run our state in any number of different ways. It's an embarrassment."

The state last passed a full-year budget in 2014.

The comptroller's data was for bills submitted up to June 2, but it didn't detail how long some of the bills had gone unpaid.

However, officials in Mendoza's office said bills from some suburban school districts go back to at least the start of the 2016-17 school year. Palatine-Schaumburg High School District 211 is owed nearly $4.8 million -- mainly for special education reimbursements -- and has been seeking payment since September 2016.

School districts "are in a quandary" about how to budget for the coming school year, District 211 Superintendent Dan Cates said. "Schools need to brace for another year of uncertainty."

Health insurance management firms like Oak Brook-based Molina Healthcare and Westmont-based Illinicare, both health providers for Medicaid recipients, are owed the most in the suburbs, together accounting for more than $1 billion.

Some vendors were owed just pennies. Paddock Publications, the parent company of the Daily Herald, is owed $321.13, according to the comptroller's report. 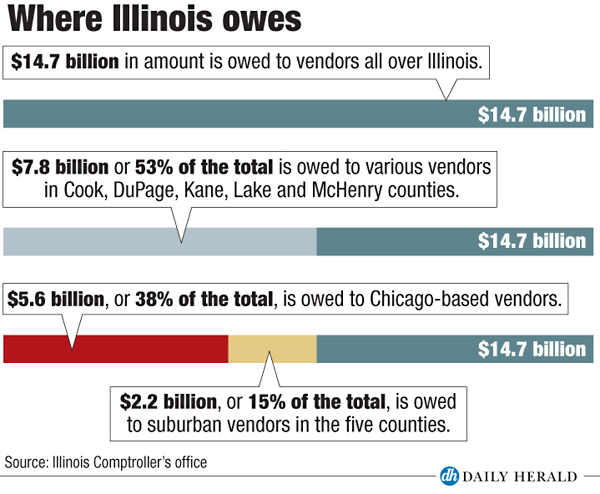 To compound the state's financial woes, state law requires interest payments on most past due bills after 60 days.

"Currently, we owe something like $700 million to $800 million in interest alone," said Democratic state Rep. Marty Moylan of Des Plaines. Democrats blame Republican Gov. Bruce Rauner for insisting on pro-business changes before agreeing to a budget, while the GOP blames Democratic leaders who control the legislature.

Some lawmakers are worried vendors will stop doing business with the state.

"Who are you getting to do the work that's willing to wait months, if ever, to get paid?" said Grayslake Democratic state Sen. Melinda Bush. "We've got to pass a budget to be sure we're getting the best workers."