Why so few women are suburban mayors

When Gayle Smolinski became mayor of Roselle in 1993, no one batted an eye.

Female mayors already were serving in nearby towns such as Oak Brook, Villa Park, Warrenville and Winfield.

"I wasn't such an anomaly. It was something very comfortable. I never had a problem with being respected or included," she said. "But over the years, I have noticed less and less women running."

After this month's municipal elections, women are the top elected officials in only 15 of the 97 communities in the Daily Herald coverage area that spans portions of Cook, DuPage, Lake, Kane, McHenry and Will counties.

The percentage was slightly higher before the election, but four sitting female mayors, including Smolinski, didn't seek re-election.

Among 275 Chicago-area communities, there are 42 female mayors, or 15.2 percent, said David Bennett, executive director of the Metropolitan Mayors Caucus. The peak since the caucus was established 16 years ago came in 2009, when 49 out of 275 mayors were women, or 17.8 percent.

That's despite women making up more than half the number of registered voters.

Female mayors cite several factors for their relatively small numbers, both historically and in 2017: time, family responsibilities and the rigors of campaigning.

Their male counterparts face many of the same challenges, but women still shoulder more of the burden of household responsibilities, leaving them less time to consider governing, says Rebecca Sive, author of "Every Day is Election Day: A Woman's Guide to Winning any Office, from the PTA to the White House."

Also, 60 percent of women work outside the home, gaining ground on the 70 percent of men who do likewise, according to the Women and Minorities in the Illinois Labor Force 2016 report.

And suburban female mayors say more women in their communities are working full- or part-time jobs now than in the recent past, giving them less time to balance work and family -- and not enough to think about leading their communities.

"When I became mayor, there was still an opportunity for women to be stay-at-home moms. Being a mayor can be done part-time and intertwined with raising your children," Smolinski said. "Now most women are working, and to be a working mom and spend time with your children and husband doesn't leave time to also do the job of mayor."

Barrington Mayor Karen Darch says despite women's small presence among suburban mayors, where they lead 15 of 97 towns the Daily Herald covers, "women have accomplished a lot in their communities and been very successful." - Patrick Kunzer | Staff Photographer
Awkward encounters

"Maybe we've achieved some sort of equality so it doesn't really matter anymore," she said. "Women have accomplished a lot in their communities and been very successful mayors or village presidents -- I don't see any reason why that wouldn't continue."

But when some mayors stepped into their roles, true equality still was elusive.

Linda Lucassen, mayor of Round Lake Park, said she had a tough time convincing some men of her worthiness to hold office during her campaigns, first for village clerk in 1997, then for trustee in 2011 and mayor in 2013.

"If they're used to having male leaders, they're like, 'Why are you doing this? What are your strengths? What are you going to bring to the table?'" she said. "Women have slowly but surely started speaking up and speaking out and have found that they do truly have a voice in local government."

A slow rise to municipal power holds true for women across the nation, where the percentage of female mayors slightly tops the percentage in the suburbs. Among 1,391 towns with more than 30,000 people nationwide, 268 are led by women, or 18.9 percent, according to a 2016 report by the U.S. Conference of Mayors and the Center for American Women and Politics.

Suburban women who are mayors say they don't face discrimination because of their gender. But they do tell of awkward encounters with strangers who make assumptions about who's in charge.

"The one challenging thing is when you're dealing with larger outside groups and your husband is with you -- they don't know which one is the mayor," Mount Prospect Mayor Arlene Juracek said.

Female mayors say they're well-equipped to lead, bringing a different temperament and perspective than if men alone were at the helm. 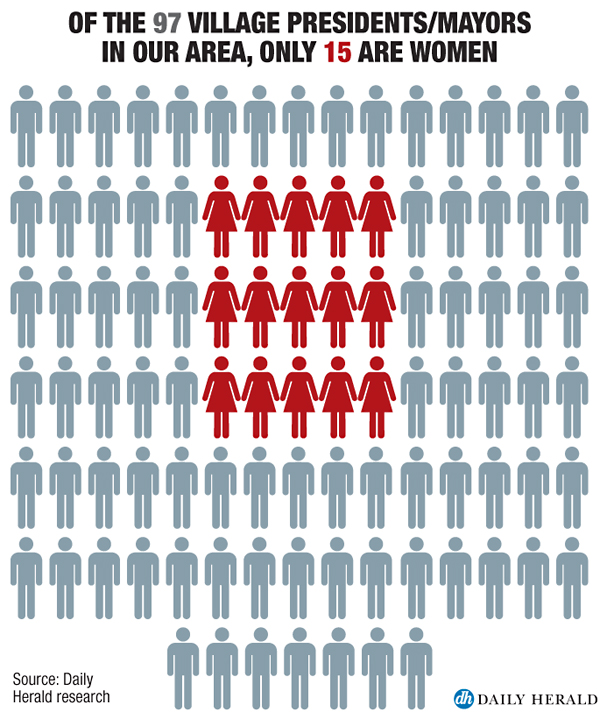 One reason for the shortage of female mayors, Juracek says, is a possible lack of "available talent" rising up through planning and zoning commissions or village boards. If women aren't gaining experience in these positions that teach the ins and outs of municipal government, she says, it's tough for them to take on a mayor's job.

Many women today are "very cause-driven," Juracek says, but to become mayor, leaders must rise above any one specific issue and see the broader picture.

Another reason, says author Sive, could be a bias toward women holding executive offices. They're the most difficult for women to achieve across politics, business and the philanthropic world. "The higher up the institutional ladder you go, the fewer women there are," she said.

To break that barrier, Sive encourages women to run for elected office as soon as they feel they're able. Women typically wait longer than men to start their political careers, citing family, work and household responsibilities, which can limit their possibilities once they commit to running.

Buffalo Grove Mayor Beverly Sussman is one who waited. She volunteered with the village's disabilities commission for 15 years before she retired from her career as a teacher and sought elected office as a trustee.

After one term on the village board, she wanted to do more and -- as she always told her students and her sons -- "reach for the stars." So she ran for mayor and won.

It's the campaigning for office that discourages many interested and involved women, say the mayors of Glendale Heights and Gurnee, Linda Jackson and Kristina Kovarik. People can be nasty during campaigns, leveling personal attacks and bringing families into the fray.

"Women naturally and instinctively don't like the confrontation and the rough climate of politics," Kovarik said. "Women would love to govern and be mayors and trustees, and they're excellent at it. But it's the campaigning -- that's some rough stuff. I think women shy away from that and find other ways to contribute."

Lincolnshire Mayor Liz Brandt points out one way to turn that around -- by noting the heavy impact local government can make on property taxes and quality of life -- both of which women value.

Brandt came up through local politics by volunteering to help the village buy a former Christmas tree farm and turn it into soccer fields and then by serving as a trustee.

"I'm not a politician. I don't have a desire to go on to bigger, better things," she says. "I just wanted to make my community better and have an impact where we live and where the majority of our taxes are going. That's something hopefully that would be appealing to more women."