How Naperville voters could weigh in on future of townships

The ongoing road services debate between the city of Naperville and the Naperville Township road district now is spilling into a broader question of whether townships serving the city should continue to exist.

Some are saying it's time to ask the voters.

One question could ask if residents support the road services agreement, under which the city would provide maintenance, landscaping and snow plowing for 49.3 lane miles of unincorporated roads.

The other could ask if voters think township government should be abolished within the city, which is served by parts of Naperville, Lisle, Wheatland, DuPage and Milton townships.

Coyne said that question keeps coming up as progress toward a road services agreement has stalled.

"Why do we still have them (townships)? What do they do? Have they outlived their usefulness?" Coyne said. "I've never been able to answer what they're providing." 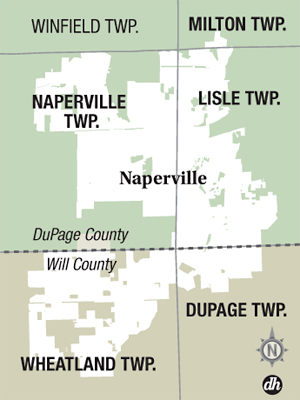 He suggested the ballot could ask: "Should township governmental units be abolished within the city of Naperville?"

Naperville Township Highway Commissioner Stan Wojtasiak said the city would have no jurisdiction to enforce the results.

"One government does not have the power to close down another layer of government," Wojtasiak said.

Public talks about the proposed road services deal began in February with praise for the idea as an example of government consolidation. But city officials later said contracting with the city to conduct road work wouldn't get rid of the road district as a separate unit of government or the highway commissioner as an elected official.

The city says the potential road deal would save $700,000 a year from the road district's recent operations spending of $1.8 million. But the road district says that estimate is overstated because it's not based on a fair comparison of costs.

As the two sides have debated labor costs and service levels, they've also been unable to agree on whether a pact would have public support.

"There's a level of disconnect," Coyne said, between the city's assessment of public sentiment in favor of the deal and the township road district's assertion that residents oppose it.

"I think a nonbinding referendum question would be in order," he said. "Let's see where the community is at."

The city has until Sept. 1 to file a referendum question with the DuPage Election Commission for it to appear on the general election ballot.

Council members first will review potential wordings during the next council meeting June 7.

Coyne suggested the question ask: "Should the city of Naperville and the Naperville Highway Commissioner enter into the intergovernmental agreement approved by Naperville City Council with respect to road services?"

If approved, the question would go to all Naperville residents, no matter which township they live in.

Mayor Steve Chirico said he encourages Naperville Township or the road district to post a similar referendum questions because either of those bodies could ask the most affected group: residents within their boundaries -- in both incorporated and unincorporated areas.

Wojtasiak agreed the fairest way to ask the question would be to pose it only to residents of Naperville Township, not the other four within the city.

"It would give everyone an idea of where the public stands on this," Wojtasiak said. "At least the public would get a chance to voice their opinion."

But he said he wouldn't go as far as taking steps to create a referendum question himself.

Click here to sign up for the Naperville Newsletter
Article Comments
Guidelines: Keep it civil and on topic; no profanity, vulgarity, slurs or personal attacks. People who harass others or joke about tragedies will be blocked. If a comment violates these standards or our terms of service, click the X in the upper right corner of the comment box. To find our more, read our FAQ.