Follow @DHJakeGriffin
Updated 3/29/2016 9:58 AM
Editor's note: This is Part 3 of a continuing series on suburban water quality. Part 1: In light of Flint water crisis, is there lead in our supply? Part 2: How Antioch solved the problem of lead in its water

Over the past five years, more than 33 percent of the 172 public water systems in 89 suburbs have received some type of violation notice from the state agency, according to a Daily Herald analysis of IEPA records. While some of the violations stem from minor paperwork or administrative issues, nearly half are for "major" problems with the systems that could affect the public's health. And more than 60 percent of the suburban water systems in the analysis have received some type of violation in the past decade.

Additionally in 2015, municipal systems in Schaumburg and West Dundee received violations, as did neighborhood water systems in parts of Crystal Lake, Libertyville and Long Grove. A St. Charles youth prison with a history of lead-related issues received its most recent violation notice in 2015 as well, this time for failing to properly notify users about water quality issues.

Has your suburb had a major violation? Check out our interactive report here.

The most recent lead-related violation is from Jan. 8 at the University of St. Mary of the Lake, a seminary in Mundelein. The violation has yet to be cleared up, according to IEPA records. Seminary officials did not return calls seeking comment. 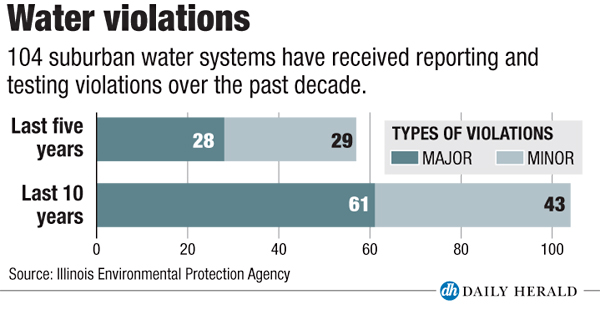 While the focus on public drinking water quality has been squarely on lead contamination in the wake of the Flint, Michigan, water crisis, reports on suburban water systems dating back to 1980 show violations for a variety of excess chemicals and contaminants that can cause immediate health issues or even long-term chronic health problems.

And while tests for lead are done every three years -- unless there is a violation -- tests for another 130-plus chemicals and contaminants are done much more frequently.

Residents of the Plum Creek Condominiums in Wheeling were so fed up with water issues, which included a lengthy history of excess levels of radium, they decided to switch over from well water to connect with Illinois American Water Co. lines feeding Lake Michigan water through Glenview. Last summer, the condos were without water for five days because a "pump shaft" broke. That was the final straw for many residents who had tired of dealing with their aged and oft-contaminated system that was reliant on well water. This year, residents decided to switch suppliers and the new, safer water started pumping into the 210 units earlier this month.

"They were experiencing a lot of maintenance issues and outright failures of the private water system, that's what drove them to us," said Richard Hermann, Illinois American's senior manager of field service and production. "The radium is a source-water-related issue, so our water will clear that situation up for them, too."

Unlike lead problems, which are almost always a result of the piping infrastructure of the system or a building, many of the other issues that can plague a water system are either products of the water itself or chemicals used to treat it.

Many municipal water systems test water samples daily to ensure the chemicals used to kill bacteria and other impurities are at a safe level. Many of the systems providing water to larger populations have far fewer violation notices from the state than their smaller counterparts that service only a particular neighborhood or facility. Suburban mobile home parks often have lengthy violation histories as well, according to the analysis. It's a matter of manpower and resources, experts said.

"They just don't have a lot of money or people handling the system and its day-to-day operations," said Jeri Long, IEPA's drinking water compliance manager. "That's a big key to prevention."

In Illinois, the IEPA maintains the Drinking Water Watch website, which allows consumers to check in on the testing results of their drinking water supplies. While not especially easy to navigate, the site catalogs every violation the systems have received dating back more than 30 years as well as test results for each water sample drawn during that time period.

Most commonly, water system operators are cited for failing to submit annual "Consumer Confidence Reports" on time, according to the analysis.

Only five of the systems have never been cited by the IEPA, according to the analysis. Municipal systems in South Barrington and Lakemoor have never received a violation notice, nor have smaller water systems that serve specific neighborhoods or facilities in Crystal Lake, Hawthorn Woods and Mundelein.

With violations come additional scrutiny and testing, which often result in additional costs to operators of these systems, many of which are municipal systems that rely on tax dollars as well as fees from users.

"Every violation has a set of steps that require follow-up reporting or testing to make sure the problem is being addressed and remedied," the IEPA's Long said. "And sometimes that additional monitoring will last for a few years and require increased sampling sites until you get multiple rounds of good results."

Jerry McIntosh, director of maintenance at the Mount St. Joseph health care campus in Lake Zurich, said the facility's first violation in 20 years in early 2015 resulted in days of additional testing to determine the cause of an increase in bacterial coliform counts from a sampling site.

"We do whatever (the IEPA) wants us to do," McIntosh said. "When we got this bad sample back, we took a repeat sample that came back bad so we took even more samples upstream and downstream so we could narrow down the cause."

Eventually, the spike in bacteria at Mount St. Joseph was attributed to a faulty "vacuum breaker" in a faucet. No one was sickened by the increased bacteria count, McIntosh said.

"There are many things that can trigger a violation," Long said. "That's why it's important to be thorough and vigilant.