Catholic schools marketing themselves to survive

This week will determine whether St. Alphonsus Liguori School in Prospect Heights will fall victim to or buck a 50-year trend of declining enrollment that's closed or merged a large percentage of the nation's Catholic schools.

With enrollment down to just 159 students and its finances in the red, the school is in the final hours of a last-ditch campaign to raise the $400,000 it needs to avoid closing in June.

The school would not be the first one to fall short. Between 1965 and 2015, the number of schools in the Archdiocese of Chicago fell by more than half -- to 193 from 429 elementary schools and to 36 from 95 high schools.

Compared to schools in Chicago, the impact on suburban schools has been less severe.

Suburban Cook and Lake counties now have 93 Catholic elementary schools compared to 154 in 1965, a drop of nearly 40 percent.

"The decline in rate of Catholic school enrollment was mitigated by the population growth of McHenry and Kane counties over the last 40 or 50 years," said Michael Cieslak, director of research and planning for the Diocese of Rockford.

"So if you look at the percentage of people choosing Catholic education, Kane and McHenry are probably not that different from the Archdiocese of Chicago," he said. "But because the population has increased so much over that time, that kind of masked the relative decline." 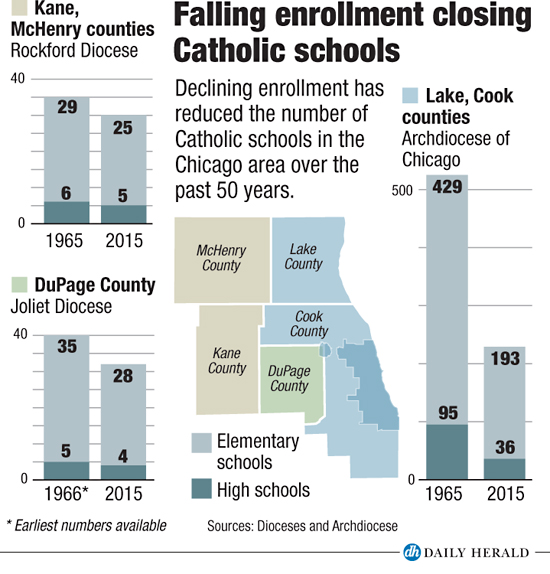 While population growth might have helped suburban schools, the impact of that one-way migration from Chicago might be starting to wane.

"To a certain extent, we are seeing a rebound out of the suburbs from certain parents," said Jim Rigg, superintendent of the Archdiocese of Chicago Catholic schools. "My suspicion is that they're going to stay (in the city) for the long haul."

Those parents aren't moving downtown but to parts of Chicago where they can find a house with a yard. Rigg said he believes the next area of vulnerability for Catholic schools is in communities just outside Chicago that are neither metropolitan enough for those who prefer the city nor suburban enough for those seeking a less urban existence.

Bishop George Rassas addresses students at Our Lady of the Wayside School in Arlington Heights. It was a homily but also a Blue Ribbon Award celebration. - Bob Chwedyk | Staff Photographer

"Obviously, I don't have a crystal ball, but I think the suburbs will remain pretty strong," he said.

Experts say a variety of factors have forced Catholic schools across the country like St. Alphonsus to either close or merge with schools from neighboring parishes.

They include the end of the baby boom, the secularization of American society, and the rising cost of education in general and of Catholic schools in particular as lay faculty with families to support have replaced teachers from religious orders and the modest stipends they were paid.

The Catholic schools that remain are buoyed by a conviction that they have something unique to offer, by an influx of Latino immigrants, and by an increased emphasis on the business side to make their operations sustainable.

"The archbishop has made it clear that Catholic education is a priority for the Archdiocese of Chicago," said Rigg, who was hired as superintendent in August after holding the same position in Cincinnati. "We're preparing the hearts and minds of a new generation of Catholics."

The nation's Catholic school system was built largely in urban centers by European immigrants during a relatively short time in the early 20th century, said John Schoenig, senior director of teacher formation and education policy at the Alliance for Catholic Education.

The Catholic population in many old city neighborhoods just isn't sufficient to keep open all the schools built there, said Sister Dale McDonald, director of public policy and educational research for the National Catholic Educational Association in Washington, D.C.

"There used to be neighborhoods with a church with its own school on every corner," McDonald said. "You can't keep them all open in this day and age. You just can't."

Just last week, the Chicago archdiocese said that it has begun a study that will result in the closing and consolidation of churches because of a declining number of priests and high cost of maintenance. The archdiocese projects that without closures, by 2030 it would have as few as 240 priests for 351 parishes.

Planning for a future

The rate of decline in the number of Catholic schools has slowed during the 21st century.

And despite retrenchment, the archdiocese still has the largest Catholic school system in the nation with about 82,000 students, just ahead of Los Angeles' system, which has grown to about 79,000 students thanks to that region's increasing Latino population.

But even among Latino immigrants who are strongly Catholic, enrollment isn't automatic, McDonald said. Many come from places where a Catholic education is for the elite, and it doesn't occur to them that it might be within their means, especially given the availability of financial aid. 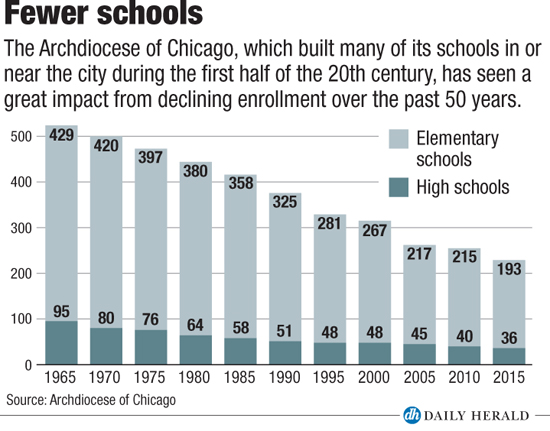 While the search for solutions to lagging enrollment largely has been left to individual dioceses, that's beginning to change, Schoenig said. In late January, about 100 superintendents gathered at the University of Notre Dame to exchange notes on their shared challenges, he said.

One area of agreement is that Catholic educators need to do more to market themselves to families for whom Catholic school enrollment might have been automatic a generation or two ago.

One part of that is Catholic Schools Week, which ended Saturday.

"The goal of Catholic Schools Week is to celebrate the excellence and success of Catholic schools," Rigg said.

Schools also are stressing what they see as the nonacademic benefits of Catholic education.

Jennifer Broderick, the volunteer athletic director at St. Alphonsus School and the parent of several students there, said she's recognized the value of a Catholic education at every phase of her children's lives.

"You see beyond going to school for math, English and science," Broderick said. "You learn how to make the world a better place. Not that that doesn't happen in public school as well, but it's so much more a part of what a Catholic education is about."

"I think that's such a central part of what the Catholic faith is about," Broderick said. "It's subconscious for her to help people in need."

Our Lady of the Wayside School in Arlington Heights has maintained relatively robust enrollment of 475 students, more than twice the Archdiocese of Chicago's preferred minimum of 225, but it didn't come without marketing, Principal David Wood says.

The school has added a part-time development director, touts its standing as a Blue Ribbon Award winner and especially reaches out to families with kids in the transitional periods between kindergarten and first grade and between fifth grade and middle school.

"We have had some decreases, but not as significant as some others have," Wood said. "It's really going to vary by the individual dynamics of that school and parish."

Finding ways to replicate the success of Our Lady of the Wayside will be among the goals of a new strategic plan for the archdiocese Riggs is working to create.

"I think it's safe to say that dioceses in particular and schools are looking at a growth model and how that can be accomplished," McDonald said.

Click here to sign up for the Arlington Heights Newsletter
Article Comments ()
Guidelines: Keep it civil and on topic; no profanity, vulgarity, slurs or personal attacks. People who harass others or joke about tragedies will be blocked. If a comment violates these standards or our terms of service, click the X in the upper right corner of the comment box. To find our more, read our FAQ.